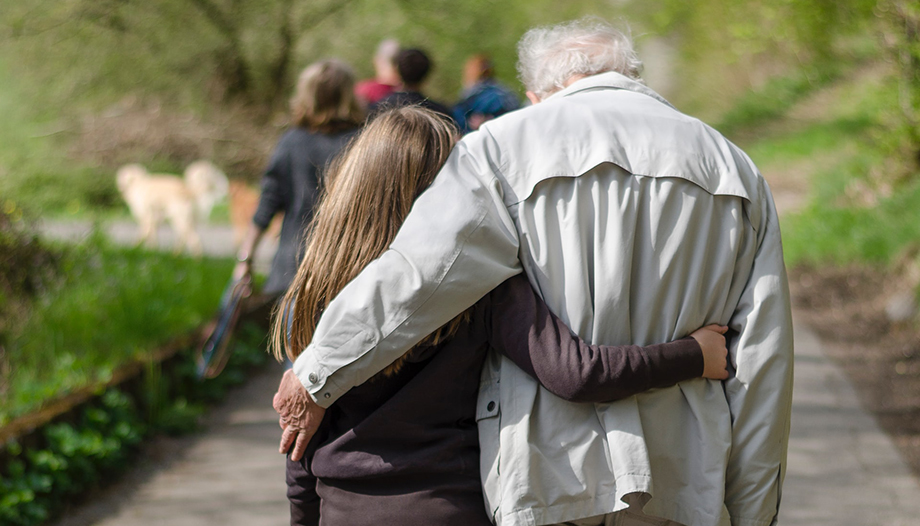 On October 13, 1978, the day before the conclave that elected John Paul II, Polish Bishop Andrzej Maria Deskur suffered a brain injury that left him immobilized for the rest of his life. A great friend of the Pope, the new Pontiff's first visit was to Gemelli Hospital, where Deskur was admitted. From then on, his visits to his sick friend became frequent, and he acknowledged that all the work he did as Pope was supported from that wheelchair.

This event at the beginning of his pontificate was like a foretaste of the witness that St. John Paul II gave to the world by accepting his own limitations, and his last weeks -he died on April 2, 2005-, in which the whole world could follow the deterioration of his health, were a living catechesis on the value of sickness and old age.

Today, too, this witness is necessary. This is why Pope Francis often refers to the role of grandparents; and, on the occasion of the Synod of Bishops on the family, he dedicated some Wednesday audiences in 2015 to grandparents. He thus wanted to recall that old age has a special grace and mission in the Church and in society, and especially the prayer of the elderly, which is a great gift for the Church: "We need elders who pray."said the Pope. And he assigned to the elderly a role in the Church's task of evangelization: "Grandfathers and grandmothers form the permanent choir of a great spiritual sanctuary, where the prayer of supplication and the song of praise sustain the community that works and struggles in the field of life." (hearing, 11-III-2015).

The role of the elderly is vindicated by Pope Francis every time he meets with families or young people. Thus, commenting on the Gospel scene of the presentation of Jesus in the temple, he says of the elderly Simeon and Anna: "These two elders represent faith as memory. Grandparents are the wisdom of the family, they are the wisdom of a people! And a people that does not listen to the grandparents, is a people that dies!" (speech to families, October 26, 2013).

Culture of discard versus culture of life

The loneliness, apathy and neglect in which many of our grandparents find themselves is a consequence of the generalized selfishness that has promoted a throwaway cultureas Pope Francis constantly denounces.

And only from a culture of lifeas St. John Paul II asked us to do, it is possible to counteract the harmful and selfish influence of the culture of discard. One of the most important testimonies that Christians can offer today is the care of the elderly and sick, who are increasingly numerous and more and more neglected.

There are many Christian families in which sickness, old age and the difficulties of life are faced with a supernatural sense and common sense. As an extension of this family atmosphere, and sometimes as a complement when it is lacking, initiatives have arisen in the Church in which the elderly are welcomed in a family home. In this article we will mention two of them: the Little Sisters of the Poor and the Little Sisters of the Homeless Elderly.

"Mi casa": a home for old and young people

The Congregation of the Little Sisters of the Poor was founded in 1839 in Cancale, a fishing village in Brittany, France, where Jeanne Jugan felt the impulse to take into her home an abandoned elderly blind woman, to whom she gave her own bed. Today, there are 32 countries where this institution, composed of 2,800 religious sisters, works, who take a vow of hospitality and carry out their mission in fraternal communities. Their houses, some 200 in number, are a living testimony of prayer, tenderness for the elderly and the promotion of educational activities in the cities where they are located.

The influence of their service reaches not only the elderly people they care for and their families, but also the young people who collaborate in their activities, either directly or through schools and educational institutions. A high school student, after participating in a festive gathering at one of the Little Sisters' houses, assured that he was going to spend more time with his grandparents, whom he had forgotten a bit. Another classmate of hers decided to return on more occasions on her own, because of the pleasant time she had spent chatting with the elderly and helping with the distribution of the food: "I've seen them so happy about the visit that I have to come more often."he said.

St. Jeanne Jugan was canonized in 2009 by Benedict XVI. In the homily of the canonization, the pontiff proposed her example in the service of the elderly as "a beacon for our societies, which have to rediscover the place and unique contribution of this period of life.".

Attached to the Congregation is an Association of lay people with 2,000 members who commit themselves annually to serve God in the love of the elderly following the example of humility and trust of St. Jeanne Jugan.

"Caring for bodies to save souls."

A similar story is at the origin of another Congregation dedicated to the care of the elderly: the Little Sisters of the Helpless Elderly. In 1872, the Spanish priest Saturnino López Novoa was living in Barbastro (Huesca), when one day he took in a sick woman who died a few months later. This event sparked in the priest, now in the process of beatification, the desire to found a religious institute for women to care for the poor and the elderly, both materially and spiritually.

Her wish became a reality thanks to the harmony with the concerns of a woman, Teresa Jornet, who found in the service of the elderly in need the way to fulfill her desire of total dedication to God. The following May 11, feast of Our Lady of the Forsaken, the new Congregation began its journey, when 10 nuns took the habit and opened the first house in Valencia. They placed as patrons of the Congregation the Virgin of the Forsaken, St. Joseph, for righteousness of heart, and St. Martha for joy in service. They currently have 204 homes in 19 countries, where they put into practice the motto of their foundress: "caring for bodies to save souls".. St. Teresa Jornet was canonized by Paul VI in 1974.

Those who have come into contact with the Little Sisters of the Elderly discover how the human affection and family warmth that permeates their homes is born of their evangelical commitment, and spreads to those who receive it, thanks to the care they take in their acts of worship and their joyful participation in various practices of piety. "Since I have been in this house, I pray the Rosary every day, and I notice that Our Lady helps me to improve my character and to have great peace."I was confessed to me by a grandfather who was not particularly pious before he entered the nursing home.

These initiatives, as well as many others that have arisen as a manifestation of charity in the Church, are still alive. And they remind us of the value of the life of our elders, something that Pope Francis has expressed on several occasions when speaking of his grandmother Rosa. On the day of his ordination to the priesthood, Jorge Bergoglio received a letter from his grandmother in which she said: "May these my grandchildren, to whom I have given the best of my heart, have a long and happy life, but if on some day of sorrow, illness or the loss of a loved one fills them with grief, may they remember that a sigh in the Tabernacle, where the greatest and most august martyr is, and a glance at Mary at the foot of the Cross, can bring a drop of balm to the deepest and most painful wounds.".

Since then she has always carried them with her in her breviary, and she admits that she reads them often and that they do her a lot of good.