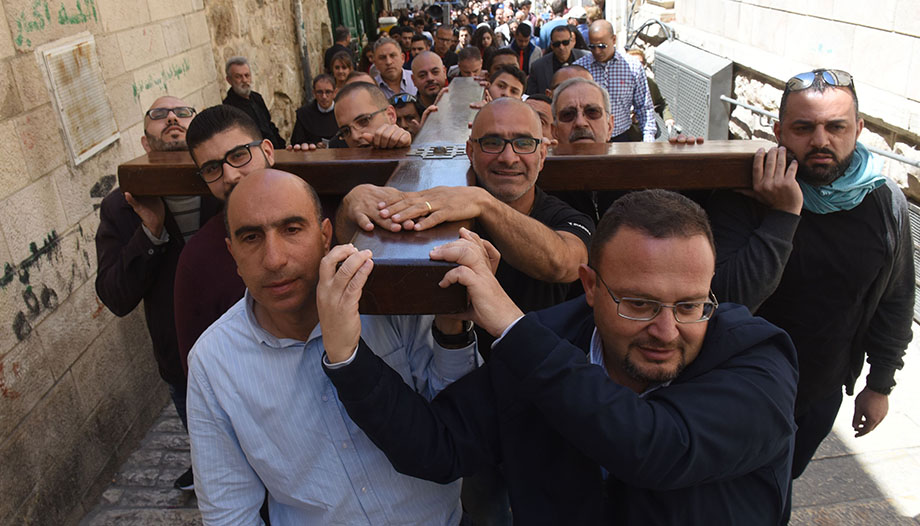 The devotion of the Way of the Cross has its origin in the Gospel accounts of the passion and death of Jesus. The various evangelists collected the story of the Lord’s life, but not in the way that a biography or a study is currently conceived.

The Passion narratives do not contain all the details of Jesus’ journey to Golgotha. Of the fourteen stations that make up the Way of the Cross today, nine are directly anchored in the Gospel accounts. The stations of Jesus’ three falls and his encounters with the Blessed Virgin and with Veronica are the fruit of the pious tradition of the Christian people.

The Via Dolorosa of Jerusalem

The Gospel of John indicates that Christ was taken from the house of Caiaphas to the Praetorium. There, after the impressive conversation with Pilate, the praetor “brought Jesus out and sat down on the judgment seat at a place called the Pavement, and in Hebrew Gabbatha. Now it was the day of Preparation of the Passover. It was about the sixth hour. He said to the Jews, “Behold your King!” They cried out, “Away with him, away with him, crucify him!” Pilate said to them, “Shall I crucify your King?” The chief priests answered, “We have no king but Caesar.” So he delivered him over to them to be crucified. So they took Jesus, and he went out, bearing his own cross, to the place called the Place of a Skull, which in Hebrew is called Golgotha. There they crucified him, and with him two others, one on either side, and Jesus between them.” (Jn 19:13–18)

Christ had been imprisoned, held in chains in the house of Caiaphas, located in an area next to the city walls, not far from Herod’s palace. From there, still in chains, he would be taken to the Antonia Tower, the seat of the Roman government.

Archaeological findings have placed this Praetorium mentioned by St John inside the Antonia Tower, built at the eastern end of the second city wall to its north-east.

The impressive model of Jerusalem at the time of the Second Temple (until AD 70) that can be seen in the Israel Museum gives us an idea of what the city would have looked like when Jesus crossed it, carrying his cross.

The route would have started from the Antonia Tower to the outskirts of the city, where the mound of Golgotha was located (today inside the Basilica of the Holy Sepulchre).

The distance was some 600 yards, about 2000 steps, which Christ would have walked loaded down with the horizontal crossbeam (patibulum) of the cross, whose weight would have ranged between about 110 and 150 pounds.

All this after having been imprisoned (probably hanging by his hands), having received dozens of lashes in the Praetorium, and with his head bleeding from the thorns of the crown plaited by the soldiers. The footsteps of Christ, which still echo in the Holy City, walked the first Via Crucis.

Today, the Via Dolorosa in Jerusalem follows only a part of what would have been the path Jesus took from the Praetorium to the place of execution. At that time, the place was outside the city walls, in a kind of wasteland. Today the Basilica of the Holy Sepulcher, which contains both Golgotha and the tomb where Christ was laid, is within the Christian quarter of what is known as the Old City of Jerusalem.

The Via Dolorosa is not simply a street, but a route consisting of parts of several streets, and is divided between the Muslim and Christian quarters.

The history of the devotion

The ups and downs of this devotion has been influenced by the historical vicissitudes through which what is now Israel passed. Travelers of the time have left us descriptions of the various stations visited in pilgrimage by the Church of Jerusalem. One of the richest sources is the well-known Itinerarium Egeriae, from the end of the 4th century. Egeria, a pilgrim who traveled to the Holy Land from the Roman province of Galicia in 381–384 AD, wrote her travel account, Itinerarium ad Loca Sancta, towards the end of the century: in it she describes her journey to the Holy Places in the East, and the liturgies and religious services carried out in the Holy Land.

The fall of the Byzantine empire and the subsequent Islamic domination in the area hindered the popular piety of local Christians and pilgrims. The Christians present in Jerusalem went through difficult times and, although the devotion to the Passion of Christ never disappeared, the near-impossibility of pilgrimages brought about a decline in the practice of following in the footsteps of the Passion.

After the reconquest of the Holy City by the Crusaders, these practices of piety returned. In the first half of the 14th century, Pope Clement VI entrusted the Franciscans with “the guidance, instruction and care of the Latin pilgrims, as well as with the guardianship, maintenance, defense and rituals of the Catholic sanctuaries of the Holy Land”, and the practice of commemorating the way that Jesus himself traveled was developed.

The Stations of the Via Dolorosa

Since 1880, every Friday (except for a break during the pandemic), starting at 3:00 p.m., the Franciscan community solemnly leads the Stations of the Cross through the streets of Jerusalem.

The route starts at the Lions’ Gate, in the courtyard of the Omariya School, an Islamic madrassa that occupies the area of the ancient Antonia fortress.

A few yards away we find two small churches, one in front of the other, dedicated to the first and second stations. The churches, which are small in size, are built on the probable location of the courtyard of the Praetorium. As a curiosity, on the floor of the chapel that commemorates Christ’s taking up the Cross, one can see “boards” of ancient dice games cut into the stone, dating from the first centuries and which could be part of those games with which the soldiers cast lots for the clothes of Jesus. The third station is marked by a chapel belonging to the Armenian Catholic Patriarchate. It is one of the best-known points of the Via Dolorosa.

Nearby we find the arch of the door that marks the fourth station: Jesus meets Mary, his Blessed Mother. A small Franciscan chapel, not far from the church of Santa Maria del Spasmo (restored by the Armenians in 1881), recalls the episode of Simon of Cyrene that is contemplated at the fifth station.

The sixth station is a Greek-Catholic chapel. The episode of Veronica, the fruit of popular piety, is recalled in the mosaic of the oratory. To the south one can see the remains of an ancient wall and the arches of an unidentified building, considered by some to be the monastery of Saints Cosmas and Damian (built in the years AD 548–563). On its exterior, a stone column with the inscription Pia Veronica faciem christi linteo deterci[t] is another of the most significant points of this path. From here, the stations enter the Christian quarter, on what would have been the cardo maximus of Jerusalem in the time of the Lord. We are already very close to the Basilica of the Holy Sepulcher, where the last five stations of the Way of the Cross are prayed.

At the place of the seventh station there is a small Franciscan chapel, in which there is a column that was probably part of the columns that marked the main street of the Roman Jerusalem. The place of the eighth station is indicated by a small black cross engraved on the wall of the wall of the Greek monastery of St Charalambos. At this point, the Via Dolorosa “breaks off”, so one goes back to the previous crossroads to continue on the way to the Holy Sepulcher.

Inside we find the five final stations of the Way of the Cross, which refer to the events that took place directly between Calvary and the rock-hewn tomb of Joseph of Arimathea, where Jesus was laid after his death.

Today these two areas, only a few yards apart, are covered by a single roof, although they are clearly differentiated and continue to manifest, with silent cries, the greatness of the salvation worked by Christ through his death and resurrection.

In the Holy City, meditation on the mysteries of the Passion takes on a special intensity and meaning. Only in Jerusalem can those who pray this devotion say “here”. Here, in this place, Jesus was condemned to death; here he died on the cross; and here, in this place, he rose and made the whole earth the home of his children.