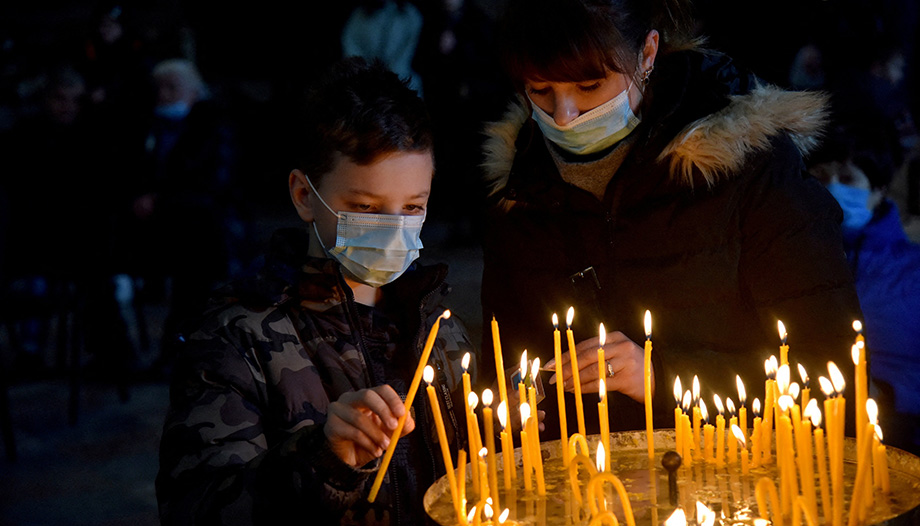 The Greek Catholic Church in Ukraine has about 3400 parishes, with about 3000 priests, out of a total of 4800, and about 1100 religious men and women (1300 in total). They constitute 8.8% of Ukrainian Catholics, which together with 0.8% of Latin-rite Catholics, reach almost 10% of the Ukrainian population.

The perception of unity in the Ukrainian nation makes enormous sense in a country of numerous religious traditions, a jigsaw puzzle in which 60% of its 41 million inhabitants are Orthodox, Greek Catholics 8.8%; Latin Catholics 0.8%; Protestants 1.5%; and “just Christians” 8.5%.

These data are from November 2021, and come from the report Specifics of religious and Church self-determination of citizens of Ukraine: trends 2000–2021, produced by the Razumkov Centre. “This is a high-level survey that has been carried out for the last 21 years,” explains Fr. Jurij Blazajewski, a priest for 10 years, who belongs to the Hogar Don Orione Congregation and is currently studying Institutional Communication at the University of the Holy Cross in Rome.

As to whether there is a common position of the Churches in Ukraine on the Russian intervention, he answered: “There are differences, because on Ukrainian territory there is the Orthodox Church of the Moscow Patriarchate, which is supporting Putin.” In his opinion, “no kind of negotiation will satisfy Russia, because what they want is Ukrainian territory. This is politics. I don’t want to intervene in politics. For us, for priests, the main thing is to reach out to our people with our prayers, to reassure their hearts and their thoughts. And to pray that this war will end as soon as possible, and there will be as few deaths as possible,” he told Omnes.

At the end of the conversation, the new Orthodox Metropolitan, Archbishop Bessarion of Spain and Portugal (Ecumenical Patriarchate of Constantinople) joined in. He referred to the words of Ecumenical Patriarch Bartholomew, who immediately, at the beginning of “this unprovoked attack by Russia against Ukraine, an independent and sovereign state of Europe”, telephoned to “His Beatitude Metropolitan Epiphanius, Primate of the Orthodox Church of Ukraine, to express his enormous regret for this flagrant violation of any notion of international law and legality, as well as his support for the Ukrainian people fighting ‘for God and country’ and for the families of the innocent victims.”

Orthodox Patriarch Bartholomew has also made an appeal for dialogue to the leaders of all states and international organizations, and it should be recalled that he was among the first, together with the episcopates of Italy and Poland, to join the call for prayer requested by Pope Francis.

Catholics in Ukraine, from the 2nd and 3rd centuries

Catholics are a minority in Ukraine, although they represent almost 10% of the population if Greek Catholics and Latins are added. However, “it is the largest Eastern Catholic Church in the world in absolute number of faithful. It is also a truly global Church, with its officially recognized structure of dioceses covering four continents (not Africa), with a rich presence among the numerous Ukrainian diaspora throughout the world, especially in Europe, the United States, Canada, Brazil and Argentina,” adds Fr. Jurij Blazajewski.

The Greek Catholic Church, of Byzantine rite, is one of the Eastern Churches linked to the Catholic Church and to Rome through the Congregation for Oriental Churches. “Christianity came to the present-day Ukrainian territories in the 2nd and 3rd centuries,” Fr. Blazajewski reminds us. “For example, the holy martyr Pope Clement died in the Crimea. There are sources mentioning the ecclesiastical structure and the presence of bishops in the Greek city-colonies of the Crimea and the northern Black Sea coast from the 3rd century. The official baptism of the king (or grand duke) of Kiev, Volodymyr, together with his people, took place in 988, at the hands of missionaries sent from Constantinople.”

“Since then,” he goes on, “the Ukrainian Church has always functioned as an autonomous metropolitan of Kiev under the Patriarch of Constantinople. However, the presence of Latin missions is also notable. An interesting fact is that the Metropolitan of Kiev never officially broke communion with Rome by a solemn act or document. Thus, all the Ukrainian Orthodox Churches and the Greek Catholic Church recognize each other as Churches ‘from the one baptismal source of Kiev’, which in itself constitutes a solid platform for ecumenical dialogue”, as St. John Paul II underlined during his apostolic journey to the country in 2001.

Ukraine is not only the cradle of Russian Christianity, but “a baptismal font for three nations: Ukraine, Belarus and Russia,” adds Fr. Jurij Blazajewski. “However, thinking in terms of nationality is not compatible with the medieval situation, since in Europe the very term ‘nation’ in the modern sense used today dates back only to the so-called ‘Peoples’ Spring’ of the 1840s.” On the question of national precedence, the priest and journalist provides the following fact: “Kiev, the capital of Ukraine, was founded in the 5th century; Moscow, the capital of Russia, was founded in 1147 by one of the younger sons of the grand duke of Kiev.”