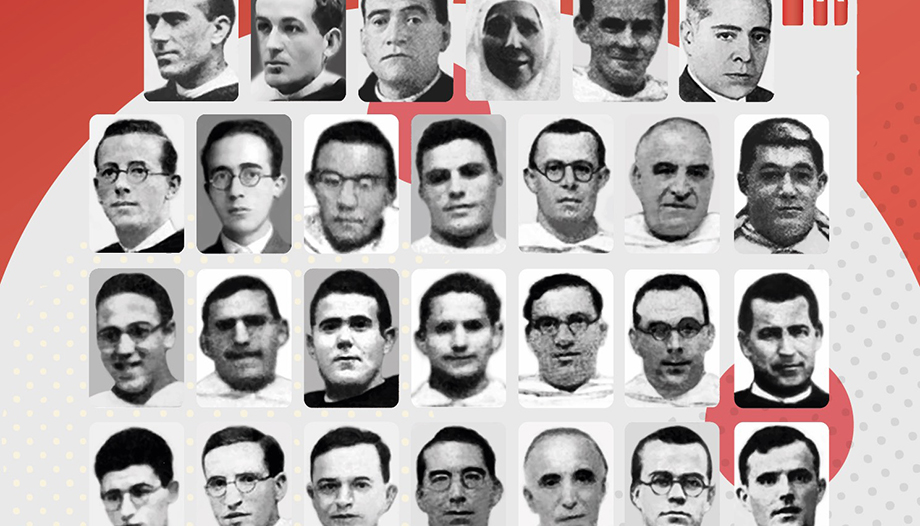 Text of the article in Italian here

27 Dominican martyrs of the 20th century in Spain will join the host of the blessed of the Catholic Church on 18th June. Among them are 25 friars, a Dominican layman and a Dominican nun.

They suffered martyrdom in three places: Almeria, Huescar and Almagro (Ciudad Real) and many of them were not yet thirty when they gave their lives for Christ.

A young generation which shows that “today also there are young men and women capable of giving their lives for a great cause, and, with no shadow of doubt, for the Gospel of Jesus Christ” as Brother Emilio Garcia, the prior of the convent of St Thomas Aquinas in Seville, pointed out.

The approval of their beatification has also helped us, even those of within the Order, know better the life and martyrdom of these friars.

Bro. Emilio Garcia explains that “these are martyrs of one of the three Provinces that existed in Spain until 2016, the Province of Betica or Andalusia. This means that those of us who belonged to one of the other two provinces knew less about the friars of Almagro, Almeria or Huescar, or their stories. Therefore, for us this beatification does not have quite the same effect as for those of their province and were related to them or lived with them. Nonetheless, they are our brothers and their example is an inspiration for all of us and tells us of their total commitment to the Gospel message and fidelity to their vocation as well as their complete Christian generosity in forgiving the people who murdered them”.

In fact, their being raised to the altars has “moved the oldest friars of the old province who have demonstrated their affection on knowing their story and their courage in witnessing to Christ.”

The example of Fructuoso Perez Marquez, a Dominican layman is the most unlike the rest of the group of new blessed because of its special characteristics.

Born in Almeria, married and father of four children, he began working, at the age of 24, in the local newspaper “La independencia”, and became the director. He also contributed to other publications such as El Correo Espanol, El Universo and El Debate.

He always explained clearly in his articles the teaching of the Church, especially in social matters. This witness of the charism of preachers in the world of the media continues to this day.

“The fact that in our Order today there are many lay-people who work with us for professional reasons and who share in our spirituality makes us think that when the case arises, they will also be prepared to bear witness of their faith by means of their professional work”, explains Bro Emilio Perez.

Those who knew him remembered Fructuoso as a fervent Catholic, a courageous defender of the truth, affable, and charitable who was denounced, tried and imprisoned.

On 26th July 1936, Fructuoso was put under house arrest and transferred to an improvised prison in the convent of the Adoration Sisters.

On 3rd August they put him on a boat, the “Segarra”. Together with some companions on the boat he was killed and his body thrown into the sea.

They smashed her head between two huge stones

The martyrdom of the only woman in this group of martyrs is exceptionally cruel. Sister Ascensions of St Joseph would die in Huescar where she was born in 1861 after a bloody interrogation.

This Dominican nun began her novitiate in the Dominican convent of Huescar around May 1884. Her life was marked by an illness which she bore patiently and with much peace.

For many years she was the messenger of the convent. On the 4th August 1936 the nuns decided to flee the convent and took refuge with family members or others who were kind enough to take them in.

The new blessed stayed with a niece until February 1937 when she was arrested for wearing a crucifix around her neck. Even at the age of 76 she was beaten mercilessly for refusing to utter blasphemies. Her persecutors left her on the floor in a pool of blood.

The next day, 17th February, they put her on a lorry with other prisoners drove them to the cemetery. There they shot their captives, among them her nephew Florencio. When again she refused to blaspheme they placed her head on a rock and smashed the skull with another rock.

Among the new blessed there was a group of 13 from the convent of Almagro. At the beginning of July 1936, several students, cooperator brothers and fathers were in the convent. Shortly after the war broke out, the mayor urged them to leave the convent. That same night several men searched the convent for weapons.

In the following days, the atmosphere became more threatening and on 25th July the friars left the convent. The local members of the Ateneo Libertario (Libertarians) argued that with the religious being so scattered it was hard to keep a proper control, so the mayor ordered the monks to be confined in an unused house. On 30th July the mayor began issuing them with documents of safe conduct.

It was a pointless exercise. The Libertarians ordered the religious off the train they were leaving with, some very young, and executed them in several different places. The remaining religious were put to death on 13th August. They were taken outside the town and shot as they prayed.