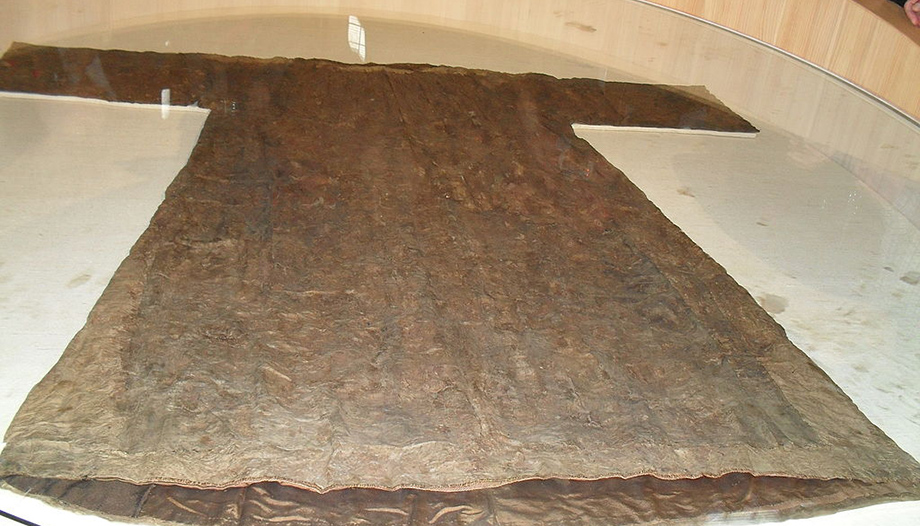 Photo: Reliquary of the Holy Tunic in Trier

What is the Holy Tunic? Traditional meaning and tokens of piety

It is a garment worn by Jesus before he was crucified. He would wear it inside other outer garments, and therefore it was not visible.

According to the custom of the time, a Jew—as Jesus Christ was—would wear three garments: an inner tunic (Latin interula, Greek chiton) more or less long depending on the economic position of the individual, with short or half sleeves; a long robe (Latin tunica, Greek himation) fastened at the waist and reaching to the ankles; and finally a cloak (toga) that was worn to go out of the house. The tunic could be made of wool, woven in one piece from top to bottom.

The Catholic Church has endowed the Holy Tunic with a very particular symbolism, based on the way it appears in Sacred Scripture. Specifically, from the reference made in the Gospel of John 19:23–24:

When the soldiers had crucified Jesus, they took his garments and divided them into four parts, one part for each soldier; also his tunic. But the tunic was seamless, woven in one piece from top to bottom, so they said to one another, “Let us not tear it, but cast lots for it to see whose it shall be.” This was to fulfill the Scripture which says, “They divided my garments among them, and for my clothing they cast lots.” So the soldiers did these things.

As we will see, there are three garments that claim to be the authentic Holy Tunic. Faced with this uncertainty about which might be the true one, the Church can only consider it as a symbol.

The fact that, as the Holy Gospel says, it was a single woven piece, without any seams, has led to the allegory of unity as a fundamental feature of the constitution and vitality of the Church. In certain sources, it is mentioned that Jesus’ garment may have been woven by his Mother, our Lady.

Also, the fact that the Holy Tunic was not distributed—torn—between the soldiers, but given by casting lots, has traditionally invited us to consider the confluence in the Church of the human and visible element on the one hand, and on the other hand the spiritual aspect, the continuous aid of the Holy Spirit who gives her life.

There are those who associate the Holy Tunic with human modesty and dignity, as opposed to the meaning of the violence by the soldiers when they stripped Jesus naked, as referred to in the Holy Gospel, which would represent the degrading treatment of the human body in the light of the vice of impurity.

There are many pious traditions that venerate the Holy Tunic, such as the multitude of pilgrimages to Trier that have taken place since the early 16th century, where the best-known relic of the Holy Tunic is preserved. It should be noted that since the 20th century these pilgrimages have an ecumenical character: that is, any Christian can go on them, not only Catholics.

There are several relics that claim to be the tunic that our Lord wore before the beginning of his passion: they are found in Germany, France and Georgia. Each one comes from a different tradition that justifies why they are where they are.

The Church has not pronounced on the authenticity of any of them, although it admits their veneration as long as we consider them representations that help to live the faith devoutly.

According to tradition, it was the mother of the Roman Emperor Constantine, St Helena, who recovered the Holy Tunic on one of her pilgrimages to the Holy Land in the 4th century. However, the accounts that have come down to us of the saint’s stay in Jerusalem refer only to the encounter with Christ’s Cross, and say nothing about the Holy Tunic.

It was not until the 9th century when it is written about the existence of the Holy Tunic in Trier, whose procurement is indeed attributed to St Helena. But between then and the 19th century it was taken from one place to another—Coblenz, Cologne, Augsburg, among others—until it returned to Trier, where it is today.

It is worth noting that Luther himself in the 16th century strongly denigrated the authenticity of the relic and its provenance. Ridiculing its devout venerators, he wondered how it could be that a garment of Christ could be discovered several centuries after Christ’s death, and how it could have come from Palestine to Trier, which was not at all clear. He even accused the Emperor of forging the Holy Tunic in order to reinforce his authority.

In favor of the veracity of the tradition of this Holy Tunic, archaeologists have discovered in the excavations of the ancient cathedral of Trier several graffiti that testify to a series of prayers or petitions to Jesus Christ, and in a place separate from the main church, which would suggest that the relic was there for the veneration of pilgrims.

As for the relic’s state of conservation, it should be noted that this Holy Tunic has several layers superimposed on the original to protect it. As for its age, an examination carried out in the 20th century dated it to the 1st century.

We have evidence of the existence of this Holy Tunic in the church of the Benedictines of Argenteuil since the middle of the 9th century. It also seems to have been in Constantinople and Jerusalem, but Charlemagne transferred it to Argenteuil for its final custody.

Due to Viking attacks, for a certain period the relic was hidden inside a wall of the church, during which time it was not exhibited to the public for veneration. In the middle of the 16th century the Benedictine abbey was burned down; however, the Holy Tunic was preserved, and monarchs such as Henri III, Marie de’ Medici, and Louis XIII were able to venerate it. In the 17th century, Innocent X officially approved such veneration, from which time the relic received many more visits.

At the end of the French Revolution the Benedictine monastery of Argenteuil was abolished, and the Holy Tunic was transferred to the parish church. However, in view of the attacks that other relics were suffering, the abbot decided to cut the tunic into pieces and hide the different parts in different places. The abbot was imprisoned, and when he was released, he recovered practically all the pieces of the tunic and was able to reconstitute it almost in its entirety.

In the 19th century, in order to protect it, its various parts were sewn into a white silk tunic, as a support for the recomposed pieces.

Several studies have been carried out to date it. The most decisive conclusions of its authenticity are those related to its dyeing, which is from the 1st century. In addition, it was concluded that it was woven in one piece, and through a procedure similar to the ones used in Syria and Palestine in the first century.

In the 21st century, Carbon-14 tests carried out on the Holy Tunic indicate a dating from the 7th century; but this has been explained pointing out that it could be due to a possible contamination of the sample used.

Finally, after having spoken of the Holy Tunics of Trier and Argenteuil, which can be examined, whether or not they are not authentic, we have a relic attested only in narrative.

Shortly after the death of Jesus Christ, the relic came into the hands of Sidonia, a young woman living in the Georgian town of Mtskheta, in the Caucasus. Tradition has it that when the Romans cast lots for the tunic of Jesus, a Georgian rabbi, Elioz, was in Jerusalem. He managed to get hold of the tunic and took it back to his country, giving it to his sister, St Sidonia. She seized it with such fervor and zeal that she died on the spot, and the tunic was buried with her. On the site of her grave grew a cedar which would last for centuries, and from it was made seven pillars for the Cathedral of Svetiskhoveli (“The Living Pillar”).

According to the tradition, along with the Holy Tunic (chiton), which remains hidden in the foundations of the cathedral, a portion of Christ’s robe (himation) was also brought to Mtskheta; from the 11th century the fame of the relic began to spread. In the 14th century the Svetiskhoveli Cathedral in which the Holy Robe was deposited was destroyed, but the relic was saved.

In the 17th century the so-called “Georgian Holy Robe” was sent to Filaret, Patriarch of Moscow; its authenticity was attested by Nectarius, Archbishop of Vologda, Theophanes III, Patriarch of Jerusalem, and Joannicius. Reports also circulated of miraculous signs being worked through the relic. Two portions of the Holy Robe were taken to Saint Petersburg, one for the cathedral at the Winter Palace, the other for Sts Peter and Paul Cathedral. Another portion of the Robe was preserved at the Cathedral of the Dormition in Moscow, and small portions at Sophia Cathedral in Kiev, at the Ipatiev monastery in Kostroma (about 200 miles north-east of Moscow), and at certain other old churches.