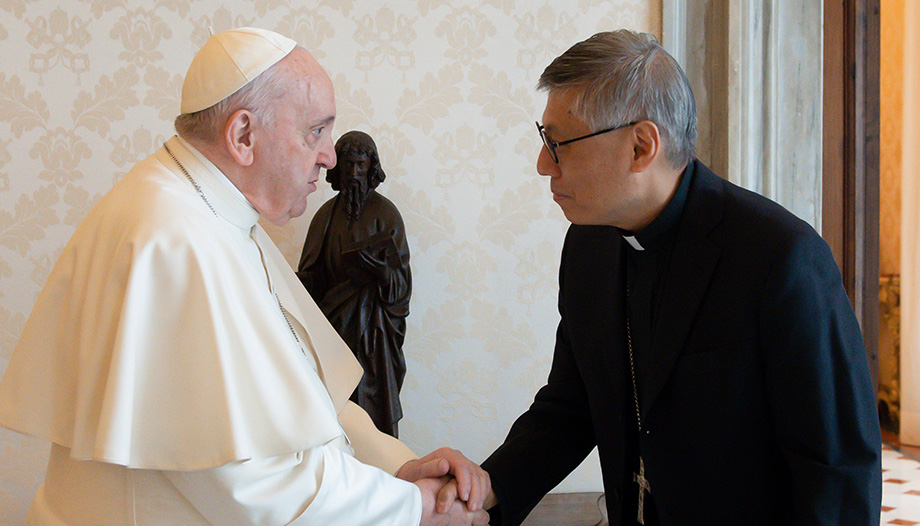 After praying the Regina Coeli on May 22nd, Pope Francis prayed for the Catholics of China, commending them to Mary Help of Christians, who is venerated on May 24th and, in particular, at the shrine of Sheshan. It is not the first time that the Pope has mentioned this anniversary. And it could hardly be otherwise: Benedict XVI established May 24th as a day of prayer for China in his 2007 letter to the Catholics of China, and it has been a fixed anniversary for 15 years.

However, Pope Francis’ words came within a more dramatic picture. Since 2008, the first year the prayer was held, missionaries have not ceased to denounce the obstacles posed by Beijing to pilgrimages to the Sheshan basilica. And with the pandemic, the shrine was closed for two years, so that in 2021 it could not be among the shrines included in the pandemic prayer marathon proclaimed by Pope Francis in May—and while the shrine remains closed, the nearby amusement park has just reopened.

Pope Francis’ words, however, were set in a broader context: negotiations for the renewal of the agreement between the Holy See and China on the appointment of bishops, which expires in October 2022; and the totally surprise arrest of Cardinal Joseph Zen, bishop emeritus of Hong Kong, who was imprisoned on May 11th and only subsequently released on bail.

The Regina Coeli of May 22

Pope Francis’ greeting at the end of the Regina Coeli on May 22nd was full of signs. First of all, the Pope renewed to the Catholics of China “the assurance of my spiritual closeness: I follow with attention and participation the lives and vicissitudes of the faithful and pastors, often complex, and I pray for them every day.”

These words contain a reference to the affair of Cardinal Zen, who will be tried on September 19th. The Pope then invited Catholics to be united in prayer “so that the Church in China, in freedom and tranquility, may live in effective communion with the universal Church and exercise her mission of proclaiming the Gospel to all, thus also offering a positive contribution to the spiritual and material progress of society.”

This second part of the greeting, in fact, calls for greater freedom for the Church and more religious freedom. It is the power of diplomacy: to say things without saying them and above all without distorting the Chinese interlocutor.

The fact is that, in the Vatican, it is not taken for granted that the agreement will be renewed. Cardinal Pietro Parolin, Vatican Secretary of State, said in an interview that he hoped to change some part of the agreement. And Archbishop Paul Richard Gallagher, the Vatican’s “foreign minister”, meeting with EU ambassadors in a closed-door lunch, reportedly said that if China wanted a more stable agreement, perhaps a permanent one, the Holy See would say no.

On the other hand, there is a detail that indicates that the Holy See wanted to give a certain weight to the agreement: it was signed on September 22nd, 2018, the first day of Pope Francis’ trip to the Baltic countries.

As is known, both the Secretary of State and the Secretary of State for Relations with States follow the Pope on his trips. Choosing that date meant that it was Bishop Antoine Camilleri, the Under-Secretary for Relations with States, who signed the agreement on behalf of the Holy See with his counterpart, Wang Chao, Vice Minister of Foreign Affairs of the People’s Republic of China.

If dates matter, it seems clear that this day was chosen because meant that, inevitably, the delegation was less high-powered, with an agreement signed by the number 3s and not by the number 1s.

The agreement was then renewed in October 2020, and has so far yielded two results: that all bishops in China are considered in communion with Rome, and that in four years, only six bishops have been appointed under the agreement.

The terms of the agreement are unknown, although there has been speculation that the Holy See engages with the Government in a process of reviewing candidates for the episcopate until the Pope appoints a bishop who is also acceptable to Beijing. However, the agreement would preserve the Pope’s full autonomy in the choice of bishops.

Certainly, the relationship between the Holy See and China is an unstable equilibrium, and the unexpected arrest of Cardinal Zen is proof of that. After the arrest, the Holy See made it known that it is closely following developments. But there was no formal protest—also because, as China is one of the few countries in the world that does not have formal diplomatic relations with the Holy See, there were no proper channels for a formal complaint.

The Cardinal, however, seemed a bit demanding. An advocate of democracy in Hong Kong, and always strongly opposed to the agreement, Cardinal Zen went so far as to try to avert the renewal by going to Rome and trying to be received by the Pope. But he was not very successful: he met only briefly with Cardinal Parolin, the Secretary of State. It was the definitive signal that the Pope was not prepared to listen to more arguments about the deal. The latest in a series of signals.

The signals to China

Earlier, in October 2019, Pope Francis had sent a telegram to Hong Kong while flying over its territory on his way to Japan. On the return flight he had downplayed the importance of the telegram, saying it was a courtesy telegram sent to all states. These are partially misleading statements, since Hong Kong is not a state, but it is appreciated by Beijing, to the point that the Minister of Foreign Affairs, Geng Shuang, had stressed that from the Pope “China appreciates friendship and kindness.”

And not only that. On his way to Japan, Pope Francis had flown over China and Taiwan. In the telegram sent to Beijing, he greeted China as a “nation”; while the greetings in Taipei were addressed to the “people of Taiwan”, even though the nunciature in Taipei is significantly called the nunciature of China.

In July 2020, Pope Francis had also decided to omit from his words at the end of the Angelus an appeal on behalf of Hong Kong, at a sensitive time for the renewal of the agreement.

These were all clear signals to China, which were appreciated.

Today, Pope Francis is trying to be careful not to anger the “Red Dragon”, but negotiations for a new agreement seem harder than ever. China would like the Vatican to be more involved, and could even put on the table the possibility of a non-resident representative of the Holy See. The Catholic world is asking for more prudence, in a situation that the Government is certainly not making any easier.

Cardinal Zen’s arrest turned out to be a mere pretext, a way of flexing muscles. The accusation, in the end, is not of foreign interference, but of not having correctly registered a humanitarian fund of which the cardinal and five other members of the democratic world were administrators.

Not much, after all, but enough to send a message to the Church: here, everything is controlled.

Nevertheless, for the Holy See it is still worth continuing the conversation. “We know that we’re putting out our hand and that the knife can draw blood, but we have to talk to everyone,” explains a monsignor who has participated in the negotiations in the past.

In the end, the agreement still seems a possibility to consider. As an old Vatican diplomatic saying puts it, “You make agreements with people you cannot trust.”