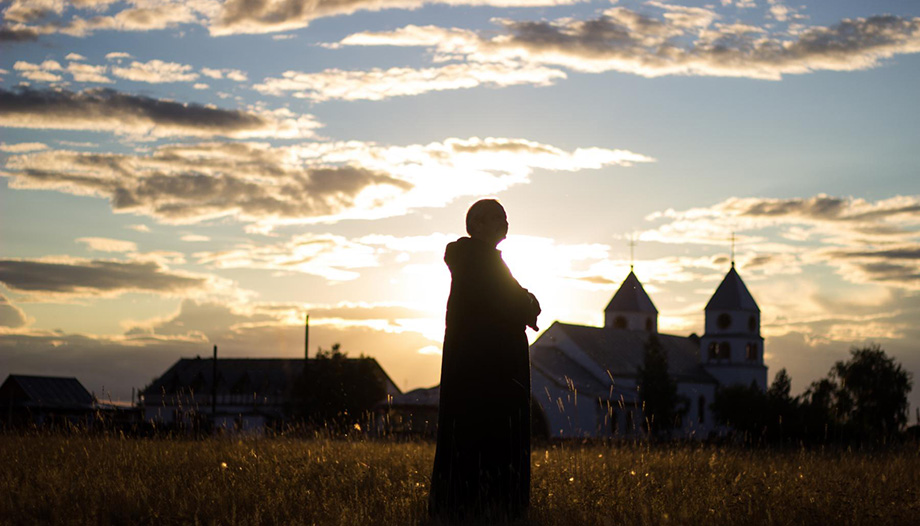 There are few places as remote as this small township of Ozernoye in the north of Kazakhstan. Its location, far removed from any inhabited area, from highways and big cities, made it the perfect spot for deportation. In 1936 hundreds of deportees were brought here -people speak of 70,000, of Polish and Ukrainian origin, one huge group after another. In most cases, their only crime against the Soviet regime was their faith. The same faith that helped them trust that lost in these deserted lands they would be able to start some kind of decent life, with the help of God.

The memories and experiences of these years are recorded in historical or fictionalized accounts in books, such as The Endless Steppe and Zuleikha opens her eyes: powerful books that describe the challenges of men and women that often were truly heroic, people who defied nature in its harshest forms in order to rebuild their lives, which the Soviet authorities had intended to blot out for good.

These deportees, thought to be hundreds of thousands in Central Asia and Siberia, built towns, opened up mines, mastered the climate, better said, reached a tacit agreement with the extreme climatic conditions so that at least some people would manage to survive. In short, a nucleus of faith, an oasis in inhospitable conditions in the middle of the steppe.

Under Our Lady’s protection

This faith took them single-mindedly to Our Lady to ask for their families’ survival. In the first years the cold and the extreme conditions killed dozens of deportees: the winters in these almost Siberian conditions could descend as low as minus 40, with icy winds that freeze one to the marrow. Hence the arrival of spring means a fresh rebirth, and the amazement that it is possible, once again, to continue living.

But hunger was always a real threat and snuffed out many lives. When a seasonal lake appeared, the result of the spring thaw, filled with fish in March 1941, around the time of the Annunciation, the Catholics of the area saw it as an answer of the Blessed Virgin to their persistent prayers.

The torrential streams of melted snow were an unexpected obstruction and somehow miraculously a lake formed near the township, 5 km wide and 7 meters deep. The fish that also appeared like a miracle were the salvation of many lives.

From that time the area has always enjoyed the protection of Our Lady. Around the lake, when it is visible (since it is seasonal, many years may pass until it actually forms), they put up a small township, and after some time a church once restrictions were eased improving the living conditions of the deportees.

The original building was very simple but it formed the nucleus of what with time would become a reference point of Catholicism in a multi-ethnic country with a Moslem majority.

When modern Kazakhstan came into being, after gaining independence in 1991, this small settlement in Burabay district, in Akmola region in northern Kazakhstan was already developing.

A much bigger church building was put up in 1990, with permission of the authorities.  A statue of Our Lady was erected in 1997, at the top of a 5-metre post; and sometimes it is in the middle of the lake, depending on the seasons. With a truly motherly gesture, the Virgin of the statue provides fish for the faithful who come to her with their requests in times of hunger.

The present parish and the church of Our Lady, Queen of Peace, are a centre of pilgrimage that includes several places filled with significance for the faithful of this and neighbouring countries.

On 11th July 2011, the church at Ozernoye was officially declared the national shrine of Holy Mary, Queen of Peace, patroness of Kazakhstan.

Recently, 1st May 2022, the bishops of the newly formed Episcopal Conference of Central Asia (which includes eight countries: Kazakhstan, Kyrgyzstan, Tajikistan, Uzbekistan, Turkmenistan, Mongolia, Afghanistan and Azerbaijan) consecrated to Our Lady not only these countries but also their peoples and their expectations.

The Altar of peace

There are other places of great significance in this place. In an area of the church some years ago a second “Altar of peace” was installed.

An enormous monstrance, replete with symbolism, in which both the faithful of the place and the discalced Carmelites of a nearby convent and the Swiss Benedictine monks who also live here permanently adore the Holy Eucharist.

This altar is the second of the twelve, as a reminder of the twelve stars in the crown of the woman of the Apocalypse, planned to be set up over the length and breadth of our planet, will offer God prayers for peace uninterruptedly.

The first altar is in Bethlehem, after being transferred from Jerusalem. The artists who constructed this other altar of Ozernoye, the “altar of Kazakhstan, built in some typically Kazakh motifs.

The altar itself is a catechesis of beauty and contains relics of St John Paul II and St Faustina Kowalska as well as some fragments of the Old Testament which in this country of various religions and ethnic groups provides a bridge bringing closer to everyone the origin of other monotheistic religions.

Opposite as one enters, the chapel containing the altar opens up a view to the deserted, endless steppe. This is also symbolic so as to direct prayers from the shrine for peace in the world. There is a providential confusion here since the word “mir” in Russian means both “world” and “peace”.

One last place recalls perhaps the saddest memory of all. 12 km from Ozernoye an enormous cross was erected in 1998 as a symbol and reminder of the tens of thousands of victims were executed in Kazakhstan under Soviet domination.

For the inhabitants of the area this is known as the “Golgotha of Kazakhstan” and its symbolism is unforgettable: considered as the geographical centre of Eurasia, exactly halfway between Fatima and Hiroshima, the literal translation of the area in Kazak is “mountain of consolation”. And the words written at the foot of the cross in four languages are really consoling:

“To God all the Glory

To the peoples, peace

To the martyrs, the kingdom of heaven

To the people of Kazakhstan, gratitude

For all these reasons it is obvious that every year the number of pilgrims visiting Ozernoye is greater.

International meetings of young Catholics are held here; pilgrims come from neighbouring countries; and even the Kazak government has included the route among the sites to visit on the “Sacred geography of Kazakhstan’, a project that includes the places of religious and spiritual symbolism in the country.