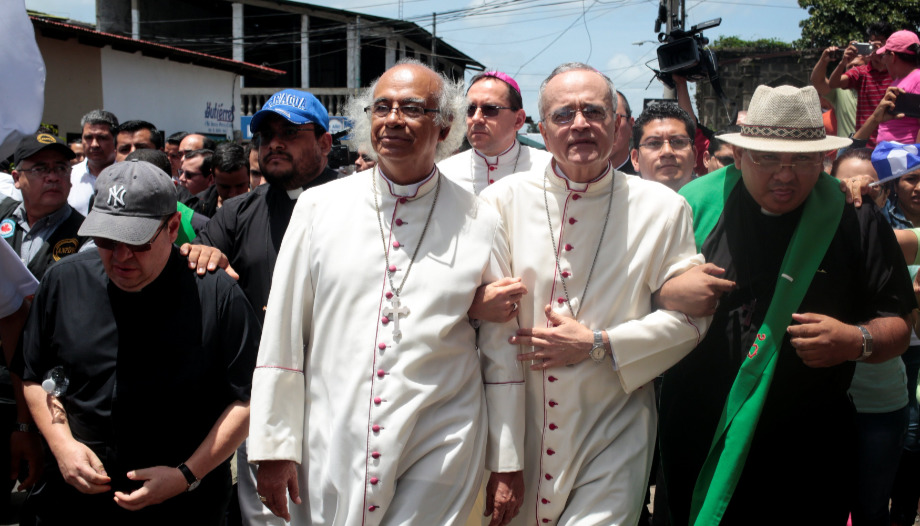 Photo: Cardinal Brenes and Monsignor Silvio Baez arrive at anti-government protests in Diriamba on July 9, 2018. On that day the two prelates were attacked by armed groups aligned with the city's government . ©CNS/Oswaldo Rivas, Reuters

At the end of June this year the international media were puzzled at the Nicaraguan government’s decision to expel the harmless Sisters of Charity from the country. How was it possible that nuns known the world over for their peaceful and self-sacrificed work were to be expelled? The answer is very simple: in their small medical dispensaries they were treating patients injured by police attempting to put down street protests. Since the government had prevented the public hospitals from treating protesters, people’s only option was to go to those who never turn a deaf ear to the needy. And only the courage of these women was capable of alleviating the effects of the damage done. The Nicaraguan crisis had reached a still higher stage.

These serious protests go back to 2018 after the government’s decision to lower pensions by 5% and increase taxes on businesses. Then, police violence caused 300 deaths and 2000 injured, and the only place where demonstrators could find refuge was the churches. The majority of parish priests country-wide opened the doors of their churches. The report of the United Nations gave an account of the serious attack on human rights.

These two events show how the president, Daniel Ortega, has been trying since that time and still today to silence the voice of the Church. On Friday 19th August Nicaragua became news once again in all the international media. Bishop Rolando Alvarez of the diocese of Matagalpa was detained in the middle of the night in the archbishop’s palace along with several other priests and seminarians. At present he is again under house arrest.

This is how the government is using the pressure of force against one of the main voices of protest against the regime, most certainly hoping that he will leave the country just as many other priests and pastors have felt compelled to leave.

Fresh harassment against the Church

In recent weeks the government has stepped up its vigilance of parishes. Many of them now have police patrols at the door during Sunday Mass. If the priest doesn’t maintain a delicate balance when speaking about the situation in the country, the faithful are not allowed to enter. This is why in the last few days we have been seeing many photos and videos on social media in which the faithful are receiving Holy Communion through the grills of the parish compounds, under the watchful eye of the police.

This is how the government is trying to pressure priests to not denounce the abuses committed and so giving rise to causes of the social and political crisis that has been keeping the country back for the past fifteen years. This has brought about more than 150,000 refugees, most of whom are displaced in neighbouring Costa Rica.

One may well ask why the Church is playing such a big role to become the number one target of the government. Throughout the last ten years or so, political repression has been extreme, giving rise to several opposition leaders either in exile or locked up (in the last year alone they have put 18 opposition members in prison). The judiciary has given in to the government such that the separation of powers no longer exists in effect.

Nicaragua is a country of less than 7 million inhabitants and nine bishops. One of them, Mgr Silvio Baez was forced to go into exile in 2019. But government pressure affects not only the hierarchy, but in recent months has also closed down Catholic radio and television stations.

The Church has tried to play a constructive role inasmuch as this is possible in a tense and politically unstable situation, but with time has become the only public voice with enough authority to denounce the attacks on human rights. And many people have come to respect and appreciate its courage. Add to this the Catholic tradition of the country, it is obvious that the Church will be viewed favourably by the majority of the people, but not by the government.

Chronology of the crisis and repression against the Church.