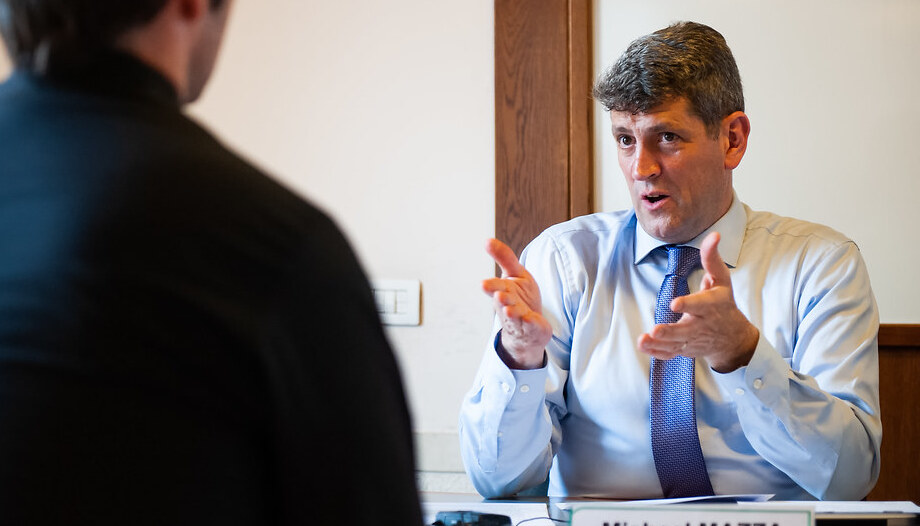 Men of Melchizedek (MOM) is an American organization that provides spiritual and material support to priests in difficulty. In the summer of 2021 it was asked by a religious order if it could develop a model for dealing with allegations of sexual abuse. It was then that MOM’s leaders decided to set up a legal office specializing in these matters. As this is a matter of the utmost importance, they were interested in developing a protocol that would ensure rigorous investigation and respect the presumption of the accused’s innocence. The aim is to work together to ensure that the truth about a particular accusation is actually ascertained.

Michael Mazza is the legal advisor to this institution. He recently defended his doctoral thesis at the Pontifical University of the Holy Cross (Rome) on the priests’ right to their good name, with particular attention to those accused of sexual abuse. In this interview, I chatted with him about the challenges presented by these criminal proceedings in the Church.

How did the idea of creating a consultancy to assist accused priests come about?

— Given the increase in the number of trials in the Church against priests and various other situations that arise, I thought that the right to the presumption of innocence and self-defense needed to be guaranteed. It’s these rights, which are fundamental for a truly fair judicial process, that I intend to serve with my work.

To what extent is the presumption of innocence at risk for priests?

— The media attention that many of these trials receive can sometimes undermine the due process rights of the accused. No one’s in favor of perpetrators getting off scot-free, but neither can we be in favor of condemning someone without due process. It seems to me that in recent years we’ve gone from one extreme to the other. It’s worth remembering, as one of my canon law professors used to say, that the symbol of justice isn’t a pendulum but a balance.

What did you do before opening the law office?

— After finishing my studies, I worked as a teacher and catechist for ten years. Then, when our family started to grow, I decided to study civil law and work as a lawyer, a job to which I’ve dedicated myself for two decades. Since July 16, 2021, the feast of Our Lady of Mount Carmel, I started counseling in my new office. I believe that Mary, Mother of Priests, is an especially important intercessor in this type of work.

The search for, and determination of, the truth undoubtedly helps the victims obtain reparation.

In your opinion, how has the Church’s handling of abuse cases in the United States been?

— That’s a pertinent question, and a very complex one. The first thing to point out is that there have been many victims of sexual abuse, and their suffering is indescribable. The damage they’ve suffered is incalculable. The passivity of the Church authorities in punishing and correcting such conduct has produced a very great scandal.

All this leads us to conclude that the hierarchy didn’t act correctly: I think few would disagree with this. But without downplaying the importance of this statement, I’d like to point out that many lawyers and psychologists who advised bishops considered that those responsible for these abuses were simply sick people, in need of treatment and healing, rather than criminals and sinners. Without downplaying the bishops’ responsibility, these approaches can help us understand the lack of rigor the allegations were often treated with.

Has the situation improved today?

— The situation has certainly improved. First of all, accusations are taken more seriously. Secondly, civil authorities are getting involved more often. Finally, and most importantly, the needs of those harmed by abuses tend to come first. However, this overall picture also presents certain shadows or challenges. On the one hand, the ease with which accusations are sometimes treated can lead to imbalances, such as the fact that anonymous complaints are used as a tool to promote private vendettas. And on the other hand, the involvement of civil authorities can sometimes cause further problems, especially if the authority is actively hostile to the Church. Finally, it has been not uncommon for the victims’ needs to be presented in purely monetary terms.

Of all these challenges, which do you consider the most pressing?

— I think the main challenge is to ensure a fair trial for accused clerics. It’s this perception that has led me to investigate this issue and to focus my professional work on it.

Could you list some aspects that could be improved in the processes?

— As I already mentioned, it’s particularly important to protect the right to defense and the presumption of innocence. Along with these, it’s also necessary to ensure the defendant’s good name; his honor shouldn’t be impugned until proven guilty.

Publishing the names of the accused before they’re found guilty in any kind of judicial or even extrajudicial process is a horrible abuse, and generates irreparable damage. If there is one fruit of my research and publication, I hope it will be the removal of those so-called lists of ‘credible defendants’.

How does your study help combat sexual abuse in the Church?

— One idea that runs throughout my research is the importance of getting to the truth about a given allegation. The search for, and determination of, that truth undoubtedly helps victims obtain redress. The statement you sometimes hear that ‘all allegations must be believed’ is populist in nature, and can be insulting to real victims, including also those who’re falsely accused and who’ve suffered real harm.

Do you have any suggestions on how the process against clerics accused of abuse could be improved?

— I could mention many. These are simple measures, nothing revolutionary. Among others, I could mention the need for better training of the people called to sit on canonical tribunals; better communication to the cleric of his rights in the process; and better legal assistance for the accused, who – like any other person – has the right to an adequate defense.

A more detailed account of these and other measures can be found in a document that I contributed to: it’s available on the website of the Men of Melchizedek association.

You have recently defended a doctoral thesis entitled «The Right of a Cleric to Bona Fama». Why were you particularly interested in this aspect?

— Starting with the idea that justice consists in giving to another a good that’s due to him, I wanted to focus on the human good that consists of reputation, one’s good name. This juridical good is particularly important with regard to ordained clergy, because of the position of service they occupy in a community of the faithful.

Throughout my research, I seek to explain what reputation consists of, why it’s important, how it has been protected throughout history in many different cultures, and finally, what this means in the contemporary context, especially in the United States.

Why is it important to have a canonical advisor?

— Allegations of sexual abuse are criminal in nature and often involve the initiation of a process that can have very serious consequences. The accusation of a crime is therefore an extremely serious matter. To deal with it, technical legal expertise is required, which most of the time an individual priest doesn’t have. Along with this, a canonical advisor can provide perspective, encouragement and a listening ear to people going through such processes.

Does your canonical counseling cover only abuse cases in the Church setting?

— The great majority of my clients, I would say two-thirds, are involved in abuse proceedings. Along with that, I also advise on other types of proceedings, such as marriage annulment cases.

Do you choose your clients?

— Certainly I do. I consider I have an ethical duty to make sure that I can represent them well, so if I lack the time or specific preparation needed for a particular matter, I prefer to refer those clients to other colleagues. In addition, before formalizing the relationship it’s appropriate to ensure mutual understanding, and that the client shares my approach to the process, which is straightforward and always respectful of the bishop’s office.

Could you briefly explain how the process against a cleric accused of abuse unfolds?

— Sure. Once a superior receives an accusation of abuse, at least in the United States, in the vast majority of cases the accused is immediately relieved of his duties. Often he’s also asked to leave his home or office, is forbidden to celebrate the sacraments publicly, is urged not to dress as a cleric, and is ordered not to present himself in public as a priest. He’s also frequently sent to an institution for psychological assessment, where he may be placed in complete isolation, made to sign a waiver of confidentiality, and subjected to lie detector tests. It’s common for him to be interrogated by a diocesan investigator or instructor without even being informed of his civil and canonical rights. In short, an allegation of abuse is the beginning of a long nightmare for the accused.

Without getting bogged down in technicalities, it’s worth noting that the procedure for punishing crimes in the Church, at least through administrative channels, is often not very protective of the accused’s rights.

As Professor Joaquín Llobell stated years ago, the impression is given that some people consider that the supernatural character of the Church exempts the hierarchy from respecting the accused’s natural rights. In this way the door is opened to all kinds of abuse, and the Church, instead of being a ‘mirror of justice’, becomes for the accused a broken and dangerous mirror. With this criticism I don’t intend to justify the situation of impunity that existed for years, but to underline that it’s also unjust to go to the other extreme, depriving the accused of the necessary means to prove his innocence.

Have your activities been well received by the bishops of the United States and the Congregation for the Doctrine of the Faith?

— There’s no generalized answer to that question. Some bishops are sympathetic to the situation of the accused priest and try to assist him. In this case, my services are usually valued and, without compromising their neutrality, a healthy cooperation is established between the authorities and our office, similar to that which can exist between a civil court and a law firm.

In other cases, unfortunately, bishops totally disregard the accused. Perhaps this behavior is due to the enormous media pressure that surrounds these proceedings in the United States, as well as the advice of some lawyers. who feel that this is the safest course of action, in order to avoid giving the impression of tacit support to those accused of being abusers.

Are there more law firms similar to yours?

How would you like things to develop in the near future?

— I pray that God will give comfort and strength to the people involved in these procedures. I’m referring both to the people who have suffered abuse and to the falsely accused priests who feel abandoned. I hope that the Lord will give strength to the bishops, as they bear a heavy responsibility and are besieged on all sides. I pray that they will encourage and support the desire for justice on the part of all those who work in diocesan tribunals.