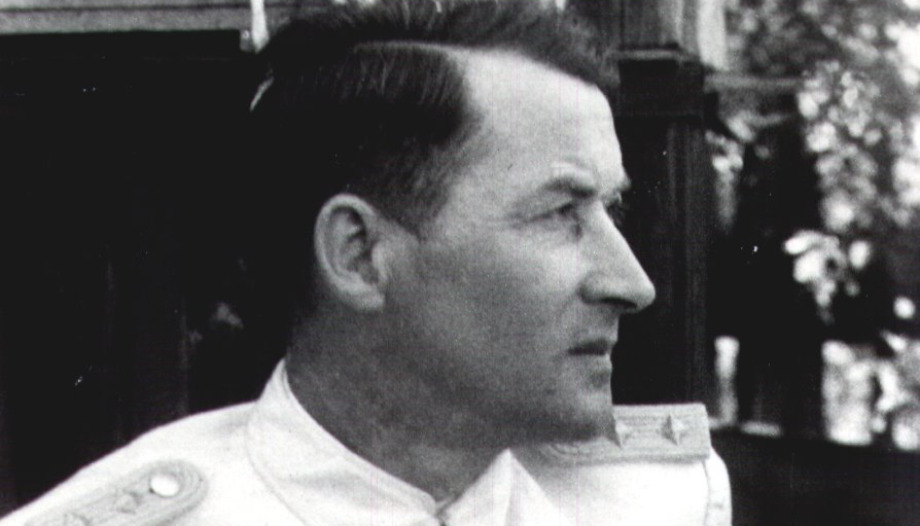 Wilm (Wilhelm) Hosenfeld was born on May 2, 1895 in Mackenzell, province of Hessen-Nassau, into a Catholic family. He finished his teaching studies a week after the outbreak of World War I, in which he participated as a soldier. He was discharged after suffering a leg injury at the beginning of 1918.

In 1920 he married Annemarie Krummacher (1898–1972), who came from a Protestant family but converted to Catholicism before marriage. After various posts in different schools, in 1927 he was appointed headmaster of the elementary school in Thalau. He moved there with his wife and two children, Helmut and Anemone; the next three children, Detlev, Jorinde and Uta, were born there. The Hosenfeld family lived in Thalau at the time of Hitler’s rise to power in 1933.

Attraction to and differences with National Socialism

Hosenfeld was initially attracted to National Socialism. He even joined the Nazi party NSDAP in 1935, probably impressed by the “Law for the Creation of the Army” of March 1935, with which Hitler broke the Treaty of Versailles. Moreover, he twice attended the Party Convention in Nuremberg, in 1936 and 1938.

However, he never agreed with some aspects of National Socialist doctrine, such as the race ideology. Nevertheless, his first clear conflict with the regime arose in connection with youth policy: as a father and teacher, he saw how the party sought to influence the youth completely, and compulsory membership in the Hitler youth movement alienated boys between the ages of 10 and 18 from their parents and from school. In particular, the principle of “autonomous education” (“youth is led by youth”) ran counter to his convictions and experience. Another aspect that disappointed him was the anti-Christian character of Nazism and its open hostility to the Church, as he actively participated in the activities of his parish and maintained personal contact with the priest.

The outbreak of World War II did not catch Wilm Hosenfeld unawares, for he had already been called up on August 26, 1939, initially with the rank of sergeant with which he had ended the Great War. In September his battalion was transferred to Poland, where he remained until his arrest on January 17, 1945.

His first assignment was—after the capitulation of the surprised Poland on September 27—the organization of a prison camp in Piabanice, for some ten thousand Polish soldiers. Already in these first moments on Polish soil, the still non-commissioned officer showed his humanity and his ability to interpret his military orders with a wide leeway: thus he allowed family members to visit the prisoners, although it was forbidden. Hosenfeld not only released some prisoners, but also befriended two families, the Ciecioras and the Pruts. Wilm traveled repeatedly, even accompanied by his wife, to the country home of the Cieciora family; the Prut family also invited him to their home on several occasions during the war.

Shortly afterwards, he was sent to Warsaw as a “sports officer”; his job was to organize sports activities for the German soldiers, but he was also in charge of giving lessons to those who did not have a high school education, even inviting teachers from Germany. He also took advantage of the relative freedom he enjoyed to employ several Poles, both Christians and Jews, which saved their lives. He also turned a deaf ear to the order forbidding “fraternization” with the Polish population; in addition to visiting Polish families, he attended Mass in Polish parishes, even in uniform.

Correspondence with his wife

Wilm Hosenfeld’s extensive correspondence with his wife has been preserved, as well as several diaries, as he had the foresight to give them to his wife when he was on vacation, or she came to Warsaw. They have been published, occupying almost 1200 pages, in a book with the significant title Ich versuche, jeden zu retten (I try to save everyone), a phrase taken from an entry in his diary during the brief time he presided over a military tribunal, which tried members of the Polish resistance. Contrary to the usual practice, Hosenfeld did not pass a single death sentence.

Three main ideas stand out in these writings: firstly, Hosenfeld’s love for his family, palpable in every letter: his concern for his wife and for his sons, who had been called up, but also his pain at not being able to accompany his sons except from afar. A second aspect is the practice of faith: “On Sunday I went to church early and went to Communion. I spent about two hours in church, praying among other things the litany of the Holy Name of Jesus”, he writes, for example, on August 3, 1942. From his diary it is clear that he went frequently to confession and prayer, which gave him strength to overcome his situation.

The third aspect concerns his inner liberation from Nazism. It was a long process, which can be seen above all in his correspondence and in his notes for the years 1942/43, when he began to learn about the Nazi cruelties in Poland and the Jewish Holocaust. In an annotation of February 14, 1943 one reads:

“It is incomprehensible that we could have committed such atrocities on the defenseless civilian population, to the Jews. I ask myself: How is this possible? There is only one explanation: the people who could do it and who ordered it, have lost all measure of ethical responsibility. They are perverse, crass egoists and deeply materialistic.

“When, last summer, the horrible massacres of Jews, children and women took place, then I knew it very clearly: now we are going to lose the war, because with that a struggle that was legitimized by the search for food and land had lost all sense. It had degenerated into an inhuman and unmeasured genocide against culture, which could never be justified to the German people and which would be condemned by the entire German people.”

Already in July 1942 he had referred—in the context of the ghetto deportation—to his “concern for the future of our people, who will one day have to atone for all these atrocities.”

From July 1942 are the following words:

“The last remnant of the Jewish population of the ghetto has been annihilated… The whole ghetto is a ruin. And this is how we want to win the war! They are beasts. With this horrible murder of the Jews we have lost the war. We have brought upon ourselves an indelible infamy, an indelible curse. We deserve no grace; we are all guilty. I am ashamed to go through this city; every Pole has the right to spit in front of us. Every day German soldiers are killed; but it will still be worse and we have no right to complain. We deserve nothing else.”

Further on one can read, in connection with the Holocaust:

“There is hardly any precedent in history; perhaps primitive men practiced cannibalism; but that in the middle of the 20th century a people, men, women and children are annihilated, we are burdened with such horrible blood guilt that one would like the earth to swallow it up… Is it true that the devil has taken human form? I do not doubt it.”

The problem of evil

Hosenfeld’s reaction was not only to try to “save everyone”, as many as he could, but also to reflect on the moral responsibility for such acts, including his own:

“How cowardly we are, that we, who wanted to be better, allowed all this to happen. For that we will also be punished and the punishment will also reach our innocent children; we too are guilty for allowing these atrocities” (August 13, 1942).

In the face of such crimes, Hosenfeld of course poses himself a “question of theodicy”; to his first-born son Helmut he writes on August 18, 1942:

“I firmly believe that God’s Providence directs the destiny of universal history and the life of peoples. Men and peoples are in his hand; he holds them or lets them fall according to his wise plan, the meaning of which we cannot understand in this life. For example, what is happening now with the Jewish people! They want to annihilate them and they are doing it.

“The immensity of human wickedness and animalism is coming to light. How many innocent people have to perish? Who is asking for Law and Justice? Does all this have to happen? Why not, why should God not let the low instincts of men come to the surface: murder, strife, you have the mind and the talent for both, for hate and for love. This is what I would think if my creatures behaved like vermin. What the wisdom of God intends for them, who knows?”

Meeting with “the pianist”

It was shortly before the entry of the Red Army into Warsaw that the encounter with the pianist Wladyslaw Szpilman, then 33 years old, took place. Hosenfeld, by then a captain, discovered him on November 17, 1944 in an abandoned house at 223 Aleja Niepodległości. The German officer helped him find a hiding place in the building where shortly thereafter the German command would be established, and supplied him with the food that helped him survive the two months until the conquest of Warsaw by the Soviet Union in January 1945. Hosenfeld said goodbye to Wladyslaw Szpilman on December 12, 1944.

Later, the pianist would declare that Hosenfeld was “the only human being in German uniform” he ever met. As a token of gratitude to the German officer who saved his life, as he was unable—despite all his efforts—to get him released from Soviet captivity, Wladyslaw Szpilman wanted to open the first concert he gave on Warsaw Radio after the war with the same Chopin’s “Nocturne in C minor” which he played spontaneously on November 17, 1944 to Wilm Hosenfeld in that abandoned house at 223 Aleja Niepodległości.

Although Szpilman and many others such as Leon Warm-Warczynski and Antoni Cieciora petitioned for his release, these petitions did not bear fruit. Hosenfeld was transferred to a special camp for officers in Minsk; later he was sent to Brobrujsk, where on July 27, 1947 he suffered a stroke which left him paralyzed on his right side and made it difficult for him to speak. After spending a few months in the isolation ward of this camp, he was transferred to a hospital in early December 1947. With 250 other convicts, he arrived in Stalingrad in August 1950.

Righteous among the Nations

On February 16, 2009, following a request by Wladyslaw Szpilman in 1998 and after several years of efforts by the “pianist’s” son, Wilm Hosenfeld was named a Righteous among the Nations by the committee of Yad Vashem, the Holocaust memorial in Jerusalem. The extraordinary nature of this honor was made clear in an official statement by the committee: “Very few Nazi army officers have received this recognition, because the German army is intimately connected with Adolf Hitler’s ‘final solution’: the genocide of 6 million Jews.” Wilm Hosenfeld is one of those rare people who wore the German uniform and who have been recognized as Righteous among the Nations.