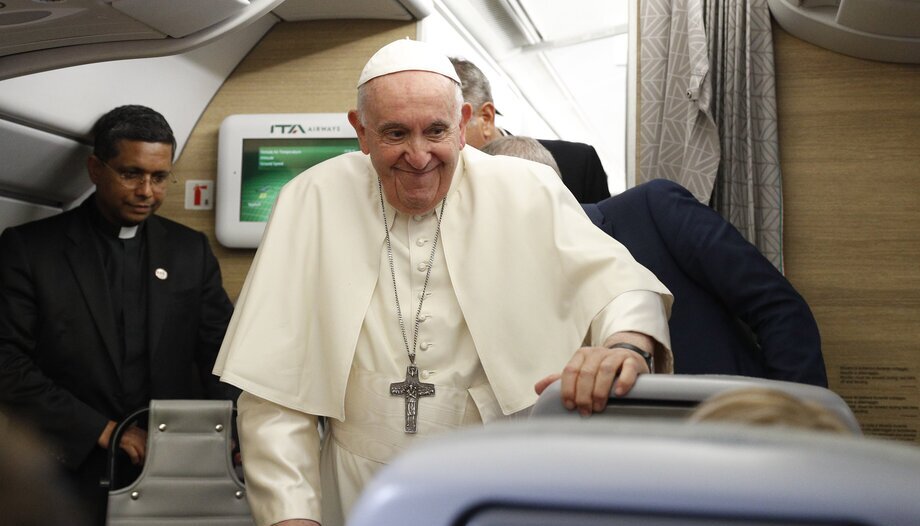 The Pope gave some clues on how to understand the drift of his addresses in Canada in his replies to journalists on the overnight flight from Iqaluit to Rome on 29th July. This trip to Canada, he explained, was linked very much to the figure of St Anne, to how the faith was passed on through the vernacular, or mother tongue, which is something feminine because the Church is both Mother and Bride.

He said: “I spoke about the old women, about mothers and about women in general. I emphasized that the faith is passed on “in the mother tongue, the vernacular, the language of the grandmothers… This is very important: the part the woman plays in transmitting the faith and in the development of the faith. The mother or the grandmother are the ones who teach the young how to pray, who explain the first things that the child doesn’t’ understand about the faith…the Church is woman. I wanted to say this clearly thinking about St Anne”. He added a reference from the Bible, 2 Machabees 7, “where it says that she encouraged each of them ‘in the language of their fathers’ to accept martyrdom. (RSV: Revised Standard Version).

In fact, on 26th July Francis spoke about the transmission of culture and faith in his homily before thousands of families in a stadium in Edmonton: “We are here thanks to our parents, but also thanks to our grandparents…Often they were the ones who loved us for what we are without expecting anything in return; they took us by the hand when we were afraid, reassured us, encouraged us when we had to make life decisions. Thanks to them we received a caress from part of their history.

Many of us have breathed the fragrance of the Gospel in their home, the power of a faith that has the taste of home. Thanks to them too we discovered a family, homely faith; yes, that’s right, because that is how the faith is passed on ‘in the mother tongue’, in the vernacular, by means of affection and encouragement, care and closeness”.

“This is our history which we have to take care of, the history we inherit from them; because we are children, grandchildren. The grandparents impressed on us the original seal of their manner of being, giving us dignity, confidence in ourselves and in the others. They passed on to us something that can never be erased”.

“Are we children and grandchildren who know how to care for the good fortune we have received? Do we remember the good teaching we have inherited? Do we speak with our elders and take time to listen to them? In our homes, which are better and better equipped, ever more modern and efficient, do we manage to keep some space for their memories, a special place, a small family sanctuary which, by means of the dearly prized pictures and objects of decoration, allow us to raise our thoughts and prayers to those who have gone before us? Do we keep the Bible or rosary of our forefathers?

Pray for them and in union with them, give some time to remembering them and keeping their legacy carefully. In the thick clouds of forgetfulness which characterize our dizzy lifestyles, brothers and sisters, we have to take good care of our roots”.

On the evening of 26th July the Pope was one more pilgrim in the sanctuary of Lac Sainte Anne, a meeting place for native Canadians. Here he came back to this topic.

“I am thinking of the grandmothers who are here with us. So many. Dear grandmothers, your hearts are sources from which springs the living water of faith, with which you have quenched the thirst of children and grandchildren. I admire the vital role of the woman in indigenous communities. They have a very important place as blessed sources of life, not only physical but spiritual too. And thinking of your kokum (grandmother in the Cree language), I am reminded of my own grandmother. From her I received the first words of my faith and learnt that’s the way the Gospel is transmitted, through loving care and the wisdom of life.

Faith is not usually discovered by reading a book in the sitting-room but is spread in a family environment and passed on in the language of the mothers, and the sweet sing-song sounds of the grandmothers. I am happy to see so many grandparents and great-grandparents here. Thank you. I thank you all and would like to say to those who have elderly relatives at home, in the family: you have a treasure! They have a source of life within their four walls. Please take care of them as the most precious heritage to be loved and taken care of”.

“In this blessed spot where harmony and peace prevail, we offer you the inconsistencies of our history, the terrible effects of colonization, the indelible grief of so many families, grandchildren and children. Lord, help us to cure our wounds. We know this takes effort, care and deeds on our part. But we also know, Lord, that by ourselves we are unable… mothers and grandmothers help to cure the wounds of the heart.

The Church is also woman and the Church is mother. In fact, there was never a time in her history when the faith was not passed on, in mother tongue, by mothers and grandmothers. On the other hand, part of the pitiful inheritance we are facing up to came about from having prevented indigenous grandmothers passing on the faith in their language and culture. This loss is tragic, but your presence here bears witness to your resilience and readiness to begin again, to your pilgrimage towards healing, and openness of heart to God who heals our being as a community”.

On 28th July, in a Mass of reconciliation in the shrine of Ste Anne in Beaupre, Quebec, Francis commented on the Gospel passage of the two disheartened disciples on the way to Emmaus.

“Let us share with faith the Bread of the Eucharist, because around the table we can rediscover ourselves as beloved children of the Father, called to be brothers and sisters. When he broke the Bread, Jesus confirmed the testimony of the women whom the disciples had not believed, that He has risen! In this Basilica, where we recall the mother of the Virgin Mary, and where the crypt is also dedicated to the Immaculate Conception, we must highlight the role God wanted for woman in His plan of salvation. Anne, the Most Blessed Virgin Mary, the women of Easter morning, indicate a new way of reconciliation, the motherly affection of so many women can accompany us, as a Church, towards a time which is fruitful and where we leave behind so much barrenness and death, and place Jesus, the Risen Crucified in the centre”.

Of the eight women who asked questions in the press conference, the first two were Canadian. The replies are translated from Italian.

Jessica Deer, of CBC Radio, a descendant of survivors of the internees, wanted to know why the Pope had not used this opportunity to publicly reject papal teachings and bulls of the time of the conquering powers, which opened the way for Catholics to take possession of indigenous lands and consider the inhabitants as inferior.

The Pope referred to words of St John Paul II when he condemned slavery on his visit to the Island of Goree, Senegal (22nd February 1992: [the island of Goree, the gate of no return]); and to Bartholomew de las Casas and St Peter Claver; and to the colonialist mentality of the time and now and to indigenous values. He ended with these words.

Pope Francis: … This “doctrine of colonization” …is evil, it is wrong. It is also used today, the same idea, perhaps with silk gloves, … For example, some bishops of a certain country told me: “In our country, when we ask an international organization for a loan, they demand colonialist laws and conditions.

To receive the loan, they force you to change your style of life’. But to go back to colonization… of America: that of the English, the French, the Spaniards, the Portuguese, four colonial powers, for which there has always been this danger, even this mentality, that “we are superior and these natives count for little”, and this is seriously wrong.

Therefore, we must work at what you are telling us: go back and re-do…what has been badly done, knowing that this same colonialism still exists today. Think, for example, of a case that everyone knows about…the Rohingya in Myanmar. They don’t even have rights of citizenship; they are considered inferior. This is still alive today. Thank you very much.

Brittany Hobson, from the Canadian Press news agency. Good afternoon, Pope Francis. You have often said that we should use language that is clear, honest, direct, even outspoken. You know that the Canadian commission for Truth and Reconciliation has described the internees system as ‘cultural genocide’, and this expression has been corrected to just ‘genocide’. The people who this week have been listening to your words asking for forgiveness have been disappointed that you never used the word ‘genocide’. Would you use this word, and do you think that members of the Church took part in this genocide?

Pope Francis: “It is true I didn’t use the word because it didn’t occur to me, but I described genocide and I asked forgiveness for these deeds that were genocide. For example, I also condemned removing children, changing the culture, changing the mentality and traditions and race: in other words, their whole culture. Yes, it is a technical term – genocide- but I didn’t actually utter it because it didn’t come to my mind. But I have said that it really happened, it was a genocide; be assured of that. You can say that I have said Yes that it was genocide. Thank you.”

This last question will give people in Canada something to talk about. Let’s see if it does. Omnes will keep you informed.