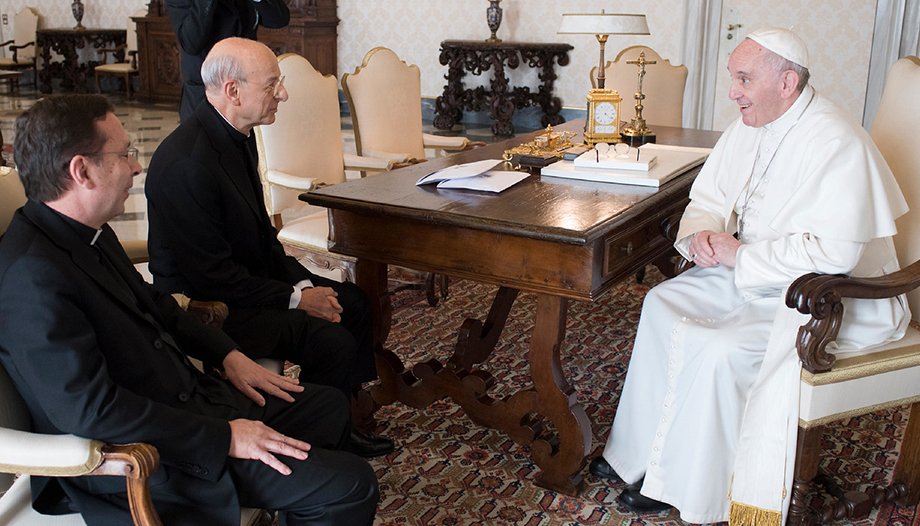 The institutional dimension and the charismatic dimension are two dimensions that can be distinguished, without confusing them. At the same time, they are necessary for the life of the Church and complementary to each other.

There is no Church that is not hierarchical, founded on the Apostles and governed by their successors, and is not at the same time charismatic. There is no such thing as a hierarchical Church and a Church ‘of the People’.

Nor is there a Church that is only hierarchical without being at the same time charismatic.

In fact, the charisms given by the Holy Spirit have been a reality in the Church since its foundation. It is enough to read the letters of St. Paul to understand that there is a great variety of gifts of the Spirit, for the usefulness and good of the Church; some are of the authority, others of the faithful (as can be seen, for example, in 1 Cor 12:28 and 1 Cor 14:27–28).

The gifts that the baptized received in the Christian community were in each case gifts very different in entity and content. But they were not for individual benefit, but for the good of the community. Therefore, their exercise must be ordered, since they are for building up, not tearing down.

Noting this reality, the Second Vatican Council emphasized that the Holy Spirit provides and governs the Church with both hierarchical and charismatic gifts. As the Constitution Lumen Gentium, n. 4 points out, ‘the Holy Spirit… guides the Church into all truth (cf. Jn 16:13), unifies her in communion and ministry, provides and governs her with various hierarchical and charismatic gifts and beautifies her with his fruits (cf. Eph 4:11–12; 1 Cor 12:4; Gal 5:22).’

The hierarchical and charismatic dimensions in recent Roman Pontiffs

This presence of the Holy Spirit has been especially valued by recent Roman Pontiffs. A clear contribution of St John Paul II was to emphasize, when referring to the presence of new groups endowed with a notable charismatic and evangelizing thrust, that the gifts of the Spirit are essential for the Church.

Thus, he said: ‘On several occasions I have stressed that there is no contrast or opposition in the Church between the institutional dimension and the charismatic dimension, of which the movements are a significant expression. Both are equally essential to the divine constitution of the Church founded by Jesus, because they contribute to making present the mystery of Christ and his saving work in the world’ (Message to the participants in the World Congress of Ecclesial Movements, May 27, 1998, n. 5). If they are co-essential, it means that they belong to the nature and being of the Church.

Pope Benedict XVI, for his part, specified how the two dimensions combine and relate to each other: ‘In the Church even the essential institutions are charismatic and, on the other hand, the charisms must be institutionalized in one way or another in order to have coherence and continuity. Thus both dimensions, raised up by the same Holy Spirit for the same Body of Christ, concur together to make present the mystery and salvific work of Christ in the world’ (Address to the Fraternity of Communion and Liberation on the 25th anniversary of its pontifical recognition, March 24, 2007).

These are two dimensions that intertwine, that complement each other, that are always present with greater or lesser intensity. How can we not recall that the charism of infallibility is united to the figure of the Roman Pontiff; that he who is successor of the Apostles receives the gifts of the Spirit to govern and guide the Church, and that among these gifts is discernment about the authenticity of charisms—as the Congregation for the Doctrine of the Faith pointed out in n. 8 of the Letter Iuvenescit Ecclesia of May 15, 2016: ‘the same Spirit gives to the hierarchy of the Church, the ability to discern authentic charisms, to receive them with joy and gratitude, to promote them with generosity and to accompany them with paternal vigilance’; it is a gift received for the good of the entire People of God.

Pope Francis has also highlighted the harmony between the two dimensions: ‘Walking together in the Church, guided by the Pastors, who have a special charism and ministry, is a sign of the action of the Holy Spirit; ecclesiality is a fundamental characteristic for Christians, for every community, for every movement’ (homily at the Pentecost Vigil with the ecclesial movements, May 19, 2013). And he has emphasized how charisms are born and flourish in Christian communities: ‘It is within the community that the gifts with which the Father fills us sprout and flourish; and it is within the community that we learn to recognize them as a sign of his love for all his children.’ They are always ecclesial, and are at the service of the Church and its members.

In the 2016 letter Iuvenescit Ecclesia, the Congregation for the Doctrine of the Faith states, ‘Ultimately, it is possible to recognize a convergence of recent ecclesial Magisterium on the co-essentiality between hierarchical and charismatic gifts. Their opposition, as well as their juxtaposition, would be a sign of an erroneous or insufficient understanding of the action of the Holy Spirit in the life and mission of the Church.’

Complementarity between hierarchy and charism: the case of Opus Dei

In the recent motu proprio Ad charisma tuendum of July 22, 2022, Pope Francis once again emphasized the complementarity of hierarchical and charismatic gifts. In fact, the prelature of Opus Dei was constituted by John Paul II with the Apostolic Constitution Ut sit, to carry out a purpose proper to these hierarchical entities: the realization of particular pastoral works (the other purpose is to contribute to the distribution of the clergy: decree Presbyterorum ordinis, n. 10; Code of Canon Law, c. 294).

As Pope Francis recalls in the Introduction to the motu proprio, Opus Dei has a particular task in the evangelizing mission of the Church: to live and spread the gift of the Spirit received by St. Josemaría, which is none other than to spread the call to holiness in the world, through the sanctification of work and the family and social tasks of the Christian.

To achieve this goal of spreading the universal call to holiness—which is not a task exclusive to Opus Dei but belongs to the whole Church (see Lumen gentium, no. 11, and Francis, Encyclical Exsultate et gaudete, March 19, 2018)—the hierarchy has created a prelature, to present a real and practical model of living this holiness in the midst of the world.

In fact, the path opened by the Holy Spirit on October 2, 1928, the date of the foundation of Opus Dei, has borne fruits of holiness among a wide variety of faithful: men and women, married and celibate, laity and clergy. Indeed, some among the faithful of the Work have reached the glory of the altars: St. Josemaría, Bl. Álvaro del Portillo and Bl. Guadalupe Ortiz de Landázuri. Opus Dei is, in fact, a possible and real example of holiness in the world.

In turn, the Holy See carried out a discernment of the charism of Opus Dei, giving its approval at various points in its history (see A. de Fuenmayor, V. Gómez-Iglesias, J. L. Illanes, The Canonical Path of Opus Dei, Scepter 1994), and in 1982 concluded that it should be configured as a personal prelature, a configuration that has been confirmed by Pope Francis in the motu proprio (which at the same time modifies some articles of the Apostolic Constitution Ut sit, in the points in which the relationship with the Holy See is specified: articles 5 and 6).

Two dimensions in the same reality

It is normal that, in the face of charismatic and hierarchical gifts, the tendency is to think that the depositaries of one or the other are different persons.

In this case, we find an entity that is hierarchical (its guide is a prelate, who acts with the necessary collaboration of a presbyterate and lay faithful as members: see cc. 294 and 296, and John Paul II, Ut sit, articles 3 and 4), and at the same time charismatic: it has to live and spread this charism. All its members have received God’s call to be saints, incarnating the spirit that God gave to the founder of the Work.

It is, therefore, an example of an entity in which the complementarity between hierarchical and charismatic gifts is palpable in the same reality. Every charismatic reality has a relationship with the function of the hierarchy. In this case, apart from the normal relationship with authority, which has decreed the authenticity of the charism and which always accompanies this living charism that has its developments in history, some peculiar aspects are added, such as the one I have just indicated: a prelature with a pastor, with a presbyterate and with laity destined to spread a charism at the service of the People of God.