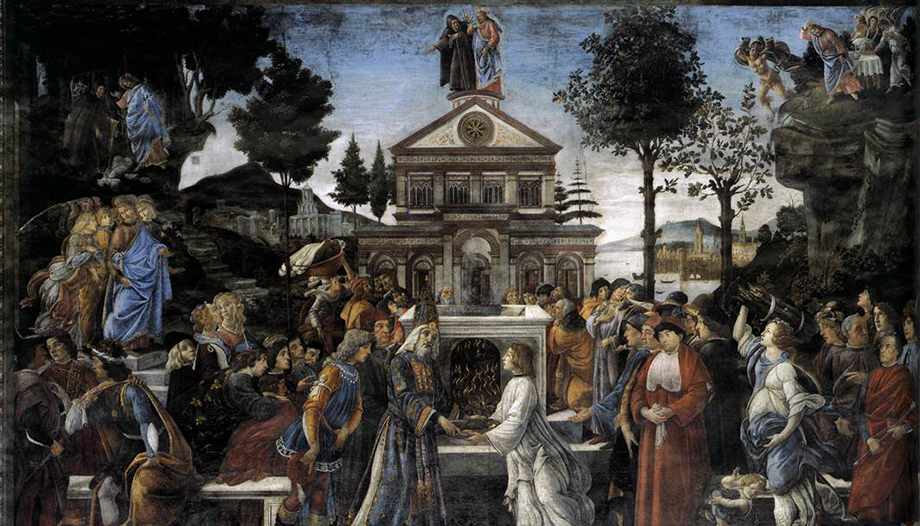 Luke speaks, like Matthew and Mark, of Jesus' forty-day period in the desert, where he is tempted by Satan; and, like Matthew, he relates the three temptations. But he changes the order to end with the temptation of the temple of Jerusalem: his entire Gospel looks towards the holy city. In the story of the Baptism, the love of the Father is manifested: "You are my Son, the beloved."In the desert we see the love of the Son for the Father. The devil, in the first temptation, refers precisely to his divine filiation: "The devil, in the first temptation, refers precisely to his divine filiation: "I am the Son".If you are the Son of God".. Jesus is filled with the Holy Spirit, and it is the Spirit who leads him into the desert. For Matthew, the temptations occur at the end of the forty days of fasting; for Luke, they take place throughout the whole period, as if to tell us that during the most intense prayer, in the greatest closeness to God, it is possible that the trials will be more numerous.

The first temptation refers to the use of the power of being God's son. Jesus refuses to use the divine power for himself; it is a power that, because it is divine, he will always and only use it in the service of others: he will heal, feed, forgive, save. Thus, from the treasure of the Church every Christian is invited to use spiritual and material goods for the service of others and not for his own benefit, even if it is only his own vainglory. To the proposal to transform stones into bread, Jesus responds with Deuteronomy: "Man does not live by bread alone.". The word of God rejects the tempter.

In the second temptation, the devil leads Jesus upward, proposing to him to conquer the earthly power of dominion over all temporal kingdoms and the corresponding glory, avoiding going through the way of passion and death on the cross in obedience to the Father's plan, but inclining to the worship of the prince of this world. Jesus, with the absolute simplicity of Scripture (Dt 6:13) tells him that worship and adoration are due only to God. Thus he manifests his total adherence to the mysterious plan of the Father: the way of annihilation in death on the cross in order to be later on the way of the Father. "exalted to the right hand of God." (Acts 2:33).

In the third temptation, the devil imitates Jesus and uses Scripture to convince him to throw himself from the top of the temple, asking the Father for a miraculous intervention to save him. It is the temptation to ask God to use his strength for a whim of ours that is not in his plans. "It is written, Thou shalt not tempt the Lord thy God." God is present, loves us and saves us according to his providence and his times, which sometimes contrast with our expectations. The devil is defeated, but he will return at the time of the end. Jesus will defeat him again with his total obedience to the Father.

The Homily in one minute