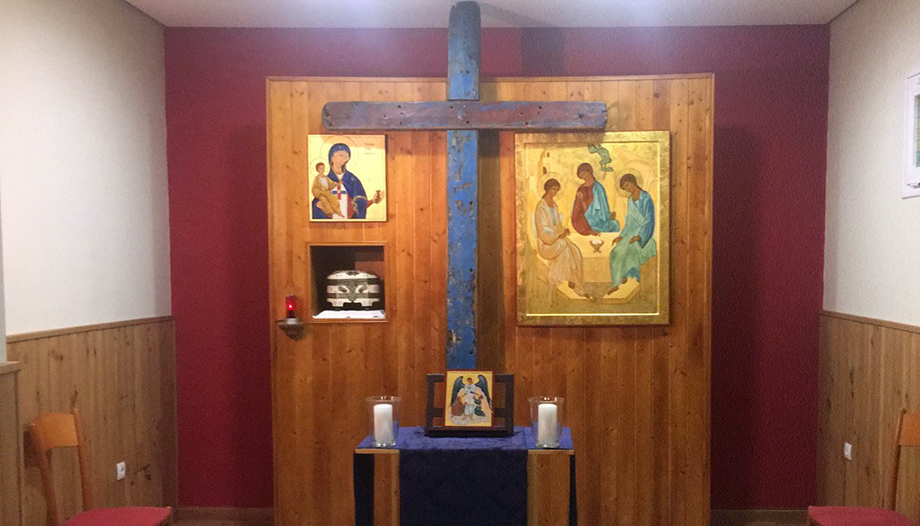 Photo: The Lampedusa Cross in the Chapel of the Trinitarian Community of Algeciras.

A year ago, on the night of March 13, 2020, the Lampedusa Cross arrived in Algeciras, by the hand of the Secretariat of Migration of this diocese, with the aim of continuing its journey through different Spanish cities this cross, made with the wood of a skiff that was shipwrecked in October 2013, leaving 366 dead off the Italian island of Lampedusa. However, the declaration of a state of alarm in Spain forced the suspension of all planned actions. Among them, the visit to Punta Carnero, which is the narrowest point of the Strait from Algeciras, the tour in a maritime rescue boat that helps immigrants or the visit to the inmates of the Botafuegos penitentiary center.

There, in Algeciras, in front of the Strait of Gibraltar, one of the hot spots for the passage of migrants to Europe, the cross had to stay. What was to be a few weeks was extended to be a full year that the Cross has remained in the custody of the Trinitarian community.

As the same community highlighted when saying goodbye to this sign, the fact of this "change of plans" showed how "perhaps the Cross wants to reach the shore of the Strait to bless those waters where the hopes of a promised land of more than 7000 immigrants drowned. Perhaps the cross has heard the cry of so many brothers who lost their lives, perhaps the cross wants to welcome the pain of so many crosses of this cemetery under water. If we die with Christ, we will rise with him". An idea shared by Graziella Cuccu, ambassador and responsible for the Cross in Spain, who emphasized how "suddenly plans have changed, as if the Cross, providence wanted something else, and thanks to this, people who did not expect it have met the Cross, have experienced testimonies of conversion and irrepressible weeping before the Cross".

This time at the Cross has been a blessing, a sign of God's presence in the midst of the suffering of humanity because of the pandemic and the situation of migrants.

For the Trinitarian Community, which attends to the Holy Trinity Parish of Algeciras as well as the prison pastoral work of the Botafuegos prison, this time with the Cross "has been a blessing, a sign of the presence of God in the midst of the suffering of humanity because of the pandemic and the situation of the migrants. The boat was reeling from the storm of the Covid, but on the Cross, Jesus was with us, welcoming the suffering of humanity and of the migrants," she said. Omnes the P. Sergio GarciaHe recalled how "from mid-March until the Easter Triduum he was in our community. Every day we prayed before the cross and the Lauds, exposition of the Blessed Sacrament and the Eucharist were broadcast live. Intimacy with God, openness to all and support in our work that continued in the house of welcome for the excluded and immigrants. We felt his blessing because everything continued in the parish, the work of Prolibertas... God was with us on the Cross to tell us that his love is stronger".

The life of faith with the community

"From the inside out, the Trinitarians who make up the community of Algeciras have been able to live their life of faith next to this imposing and significant Cross. There have been very special moments, such as the adoration of the Cross on Good Friday or the Easter celebration, where the Cross was decorated as a tree of life with ornaments made by users of the Prolibertas Foundation, most of them migrants. Before the Cross, Eucharists were celebrated for victims of covid, prayers for those affected by the pandemic, the sick, the unemployed... and for the beneficiaries of the mission of the Trinitarians: prisoners, migrants, the elderly in the neighborhood residence. In a difficult year, many people have communicated the consolation and hope they have received from praying before the Lampedusa Cross.

Working in times of pandemic

The Trinitarian Fathers have no doubt that the mystery of the Cross, especially significant in the case of Lampedusa, has been a key factor in their work during this year of pandemic. They especially wanted to point out the increase in the number of needy families who have come to the parish Caritas, both migrants and Spaniards. In Prolibertas, in the shelter and the employment program, more than 70% of the 400 people assisted in 2020 were migrants. Eight courses were held and 150 job placements were achieved, in the midst of security measures and restrictions.

Among the significant moments of the Cross during its stay in Algeciras are the following Circles of Silence which he presided over, an initiative in solidarity with migrants that takes place in cities on both shores of the Mediterranean. An act of half an hour in which, forming a circle, read a statement on current situations of migrants in which calls for respect for human rights, and silence. Once they could be carried out in person, they moved from the Plaza Alta to the Plaza Santísima Trinidad so that this act could be presided over by the Cross.

Following Francis' visit to Lampedusa, (2013), Arnoldo Mosca Mondadori, the president of the Foundation of the House and of the Spirit and of the ArtsThe idea was to present Pope Francis with a cross made of barge wood to remind the world of the never-ending tragedy of migrants.

It was not easy to find the wood, because the ships, when they reached Lampedusa, broke against the rocks. After some time of searching, Francesco Tuccio, author of the Cross, found the perfect wood, unbroken and with nails placed in such a way that "it seemed that this ship was born to be a cross".

Pope Francis blessed this Cross and said to Arnoldo Mosca Mondadori: "You must take it everywhere".

The Lampedusa Cross is made of two boards 2 meters and 60 centimeters high, 25 kilos of pain and three nails, one in each arm and one below. These three nails are original from the ship.

On April 9, 2014, after the audience, Pope Francis blessed this Cross, moved, he said to Mondadori: "You have to take it everywhere". There began the journey of the Lampedusa Cross, as a message that Pope Francis sends to all dioceses, about the reality of migrants, the poorest of the poor.