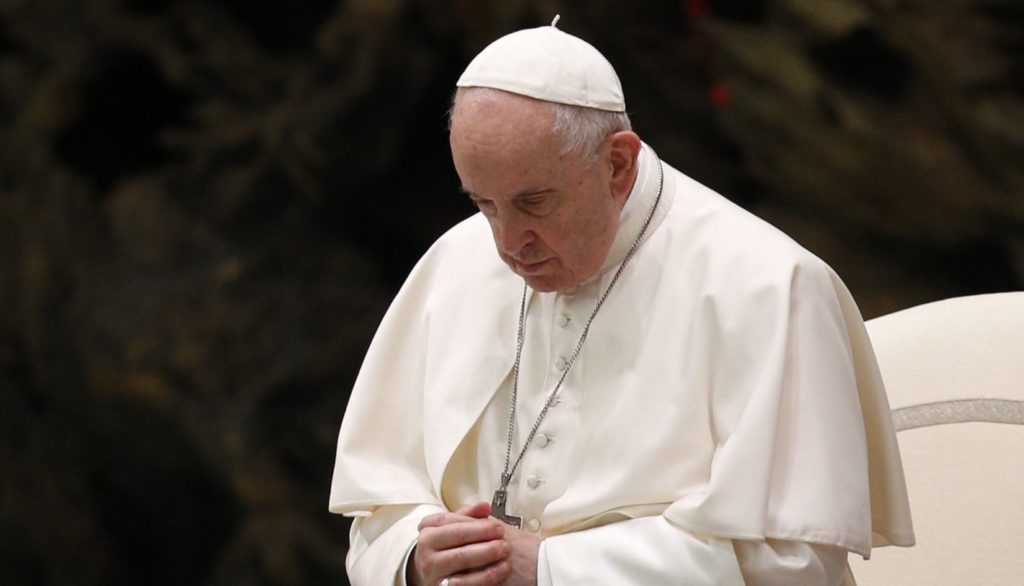 Pope Francis continued his catechesis on the Letter to the Galatians, focusing on the passage in which "St. Paul exhorts Christians to walk according to the Holy Spirit (cf. 5:16,25). In fact, to believe in Jesus means to follow him, to follow him on his way, as did the first disciples. And it means at the same time avoiding the opposite way, that of selfishness, of seeking one's own interest, which the apostle calls "the lusts of the flesh" (v. 16). The Spirit is the guide of this journey on the way of Christ, a marvelous but also exhausting journey, which begins at Baptism and lasts a lifetime. Let us think of a long hike to the top of a mountain: it is fascinating, the goal attracts us, but it requires much effort and tenacity".

"This image," Francis said, "can be useful for entering into the depths of the Apostle's words: 'walk according to the Spirit,' 'be guided' by him. These are expressions that indicate an action, a movement, a dynamism that prevents us from stopping at the first difficulties, but provokes us to trust in the "power that comes from above" (Shepherd of Hermas, 43, 21). Walking this path, the Christian acquires a positive vision of life. This does not mean that the evil present in the world has disappeared, or that the negative impulses of selfishness and pride have disappeared; rather it means that believing in God is always stronger than our resistance and greater than our sins.

"As he exhorts the Galatians to walk this way, the apostle puts himself on their level. He abandons the imperative verb - "walk" (v. 16) - and uses the "we" of the indicative: "let us also work according to the Spirit" (v. 25). As if to say: let us stand along the same line and let us allow ourselves to be guided by the Holy Spirit. St. Paul feels this exhortation is also necessary for himself. Even though he knows that Christ lives in him (cf. 2:20), he is also convinced that he has not yet reached the goal, the summit of the mountain (cf. Phil 3:12). The apostle does not set himself above his community, but places himself in the midst of the journey of all, in order to give a concrete example of how necessary it is to obey God, responding more and more and always better to the guidance of the Spirit".

The Pope went on to make reference to the fact that this "walking according to the Spirit is not only an individual action: it also affects the community as a whole. In fact, building the community following the path indicated by the Apostle is exciting, but arduous. The "lusts of the flesh", i.e. envy, prejudice, hypocrisy and resentment, are still felt, and resorting to a prescriptive rigidity can be an easy temptation, but in doing so one would step off the path of freedom and, instead of climbing to the top, would go back down. To travel the path of the Spirit requires first of all giving space to grace and charity. Paul, after having made his voice heard in a severe way, invites the Galatians to take charge of each other's difficulties and, if someone makes a mistake, to use gentleness (cf. 5:22). We hear his words: "Brethren, even if someone makes a mistake, you who are spiritual correct him in a spirit of gentleness, and take heed to yourselves, for you also may be tempted. Help one another to bear your burdens" (6:1-2)".

"In fact," Francis concluded, "when we are tempted to misjudge others, as often happens, we must above all reflect on our own frailty. It is good to ask ourselves what impels us to correct a brother or sister, and whether we are not in some way co-responsible for their error. The Holy Spirit, in addition to giving us meekness, invites us to solidarity, to bear the burdens of others. How many burdens are present in the life of a person: illness, lack of work, loneliness, pain... And how many other trials require the closeness and love of our brothers and sisters! We can also be helped by the words of St. Augustine when he comments on this same passage: "Therefore, brethren, if a man is involved in some fault, [...], instruct him in a spirit of gentleness. And if you lift up your voice, let there be love within. If you exhort, if you caress, if you correct, if you show yourself harsh: love and do what you will" (Sermons 163/B 3). The supreme rule of fraternal correction is love: to want the good of our brothers and sisters".

November: month to pray for the deceased and gain indulgences
It's happening...
Newsroom
Education
Newsroom