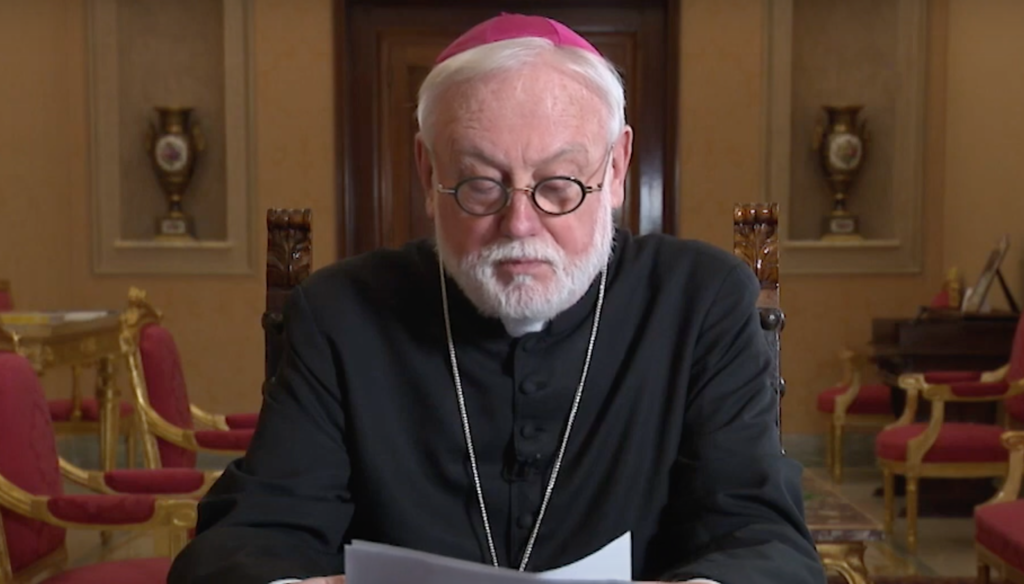 Monsignor Gallagher made this appeal in a video message during the 46th session of the United Nations Human Rights Council (HRC), which began on Monday, February 22 in Geneva, Switzerland. The four-week session, held virtually due to the health emergency, began with a first three-day session, during which heads of state and dignitaries representing various countries and regions will address the council virtually.

"The Covid-19 pandemic has affected every aspect of life, causing the loss of many and calling into question our economic, social and health systems." At the same time, "it has also challenged our commitment to the protection and promotion of universal human rights, while affirming their relevance."

As Pope Francis tells us in Fratelli tutti, "by recognizing the dignity of every human person, we can contribute to the rebirth of a universal aspiration to fraternity".

Every person is endowed with dignity

The Archbishop noted that the Preamble of the Universal Declaration of Human Rights declares that "recognition of the inherent dignity and of the equal and inalienable rights of all members of the human family is the foundation of freedom, justice and peace in the world". Likewise, the UN Charter affirms its "faith in fundamental human rights, in the dignity and worth of the human person, in the equal rights of men and women and of nations large and small".

Gallagher pointed out that these two documents recognize an objective truth: that every human person is innately and universally endowed with human dignity. This truth "is not conditioned by time, place, culture or context." However, this commitment "is easier to pronounce than to achieve and practice". And he lamented that these goals "are still far from being recognized, respected, protected and promoted in all situations".

Bishop Gallagher asserted that the true promotion of fundamental human rights depends on the underlying foundation from which they derive. He warned, therefore, that any practice or system that treats rights abstractly-separated from pre-existing, universal values-risks undermining their raison d'être, and thus, "human rights institutions become susceptible to prevailing fashions, visions or ideologies."

The archbishop stressed that "in this context of rights devoid of values, systems can impose obligations or sanctions that were never foreseen by the States Parties, which can contradict the values they are supposed to promote. The secretary added that they may even "dare to create so-called 'new' rights that lack an objective foundation, thus moving away from their purpose of serving human dignity."

Illustrating the inseparability of rights and values with the example of the right to life, Msgr. Gallagher applauded that its content has been "progressively expanded with the fight against acts of torture, forced disappearances and the death penalty; and with the protection of the elderly, migrants, children and motherhood."

He also said that these advances are reasonable extensions of the right to life, since they maintain their fundamental basis in the inherent good of life, and also because "life, before being a right, is above all a good that must be valued and protected".

Bishop Paul Gallagher pointed out that, in the face of the current Covid-19 pandemic, some measures applied by public authorities to guarantee public health violate the free exercise of human rights.

"Any limitation on the exercise of human rights for the protection of public health must come from a situation of strict necessity," Gallagher noted, adding that "a number of people, who are in situations of vulnerability - such as the elderly, migrants, refugees, indigenous people, internally displaced persons and children - have been disproportionately affected by the current crisis."

Therefore, he insisted, any limitation imposed in an emergency situation "must be proportional to the situation, applied in a non-discriminatory manner and used only when no other means are available".

In the same vein, he also wished to refer to the urgency of protecting the right to freedom of thought, conscience and religion, noting in particular that "religious beliefs, and the expression of these beliefs, constitute the core of the dignity of the human person in his conscience".

He noted that the global response to the covid-19 pandemic reveals that "this robust understanding of religious freedom is eroding." Gallagher stated that "freedom of religion also protects its public witness and expression, both individually and collectively, in public and in private, in forms of worship, observance and teaching," as recognized by numerous human rights instruments.

Therefore, to respect the inherent value of this right, Msgr. Gallagher, that political authorities should reach agreement with religious leaders, as well as with leaders of faith-based organizations and civil society committed to the promotion of freedom of religion and conscience.

Finally, Gallagher noted that the current crisis presents us with a unique opportunity to approach multilateralism "as the expression of a renewed sense of global responsibility, of solidarity based on justice and the achievement of peace and unity within the human family, which is God's plan for the world."

He recalled Pope Francis' invitation in the Fratelli tutti encouraging everyone to recognize the dignity of every human person in order to promote universal fraternity, and encouraged a willingness to go beyond what divides us in order to effectively combat the consequences of the various crises.