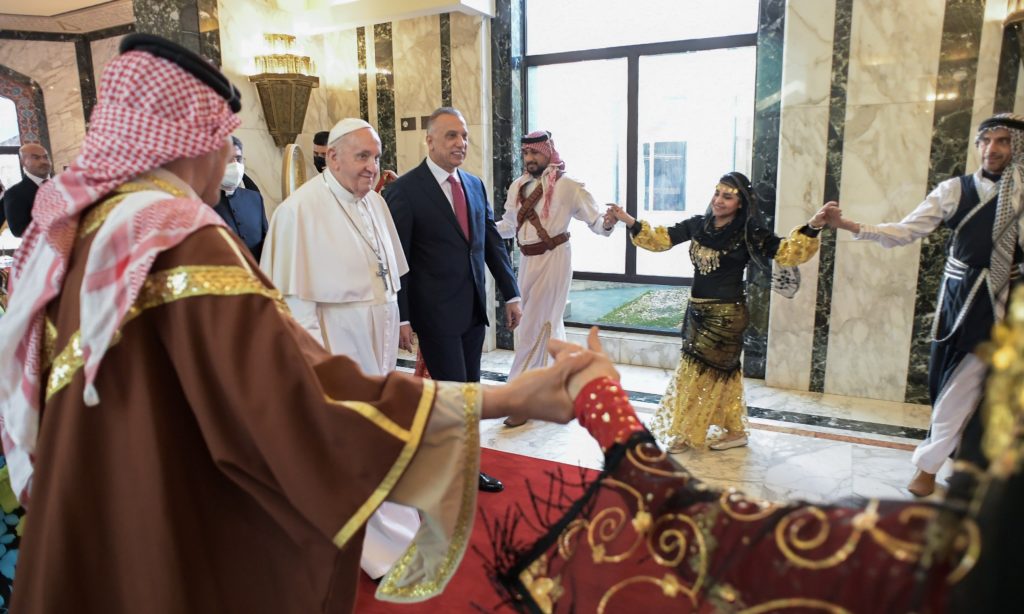 His plane landed at Baghdad's international airport at 2 p.m. (Iraqi time), marking the beginning of his 33rd international apostolic journey. In Baghdad, a long red carpet and trumpets in the background with The hymn to joya, greeted the Holy Father. A song in tune with the motto of the trip: "You are all brothers." (Mt 23:8).

Prime Minister Mustafa Al-Kadhimi, at the foot of the steps of the Alitalia plane, received the Pope and together they moved to the VIP lounge of the airport for a private meeting and official photo. The Pope presented the Prime Minister with a triptych, a silver travel medal and a special edition of his Encyclical Fratelli tutti.

On the flight, the Pope had remembered with affection the Mexican Valentina Alazraki, the doyenne of the flights with the Holy Father, who is not on this trip, and whose baton has been taken up this time by the American Philip Pulella. Before leaving, Francis spent a few moments with a dozen Iraqi refugees, hosted by the Community of Sant'Egidio and the Auxilium cooperative, accompanied by the Apostolic Almsgiver, Cardinal Konrad Krajewski.

The flight lasted four and a half hours, during which he flew over Greece, Cyprus, Palestine, Israel, Jordan and, finally, part of Iraq, until his arrival at Baghdad airport. As is tradition, the Pontiff sent telegrams to the authorities of each of the countries flown over. On board the plane, a very special image accompanied the Holy Father during the trip: Our Lady of Loreto. "This is a flagship trip.", Francis told reporters."It is also a duty to a land that has been tormented for many years. Thank you for joining me.

After his arrival in Baghdad, Pope Francis went to the Presidential Palace, where the official welcoming ceremony took place. The President of the Republic of Iraq, Barham Ahmed Salih Qassim, recalled that "Our world is unfortunately living today a time of oppositions and in the East we are losing the aptitude for pluralism". This path incites to terrorism and to commit atrocities under pretexts that have nothing to do with the divine message and this is what threatens our future".. It is essential to combat extremist ideologies and root out the roots of terrorism.", added the President of the Republic, according to cope.es

Law and protection of religious communities

In his address to the authorities, civil society and the diplomatic corps, the first on Iraqi soil, the Pope alluded to the process of reconstruction of the country, in a moral sense in a special way.

"Only if we manage to look at each other, with our differences, as members of the same human family, can we begin an effective process of reconstruction and leave future generations a better, fairer and more humane world." said the Pope. "In this regard, the religious, cultural and ethnic diversity that has characterized Iraqi society for millennia is a valuable resource to be harnessed, not an obstacle to be removed." he stressed.

"Today, Iraq is called upon to show everyone, especially in the Middle East, that differences, rather than giving rise to conflict, should cooperate harmoniously in civil life." the Pope continued in this vein. "Fraternal coexistence requires patient and sincere dialogue, safeguarded by justice and respect for the law. It is not an easy task: it requires effort and commitment on the part of all to overcome rivalries and oppositions, and to dialogue on the basis of the deepest identity we have, that of children of the one God and Creator".

Based on this principle, "the Holy See, in Iraq as elsewhere, never tires of appealing to the competent Authorities to grant all religious communities recognition, respect, rights and protection. I appreciate the efforts that have already been made in this direction and I join my voice to those of men and women of good will to move forward for the benefit of the country".

The Pope rejected terrorism, based on fundamentalist ideas, and remembered the persecuted Yazidi minority. "In recent decades, Iraq has suffered the disasters of wars, the scourge of terrorism and sectarian conflicts often based on a fundamentalism that cannot accept the peaceful coexistence of various ethnic and religious groups, of diverse ideas and cultures. All this has brought death, destruction, ruins still visible, and not only at the material level: the damage is even deeper if one thinks of the wounds in the hearts of many people and communities, which will take years to heal".

"And here." he added, "among so many who have suffered, I cannot fail to remember the Yazidis, innocent victims of a senseless and inhuman barbarism, persecuted and killed because of their religious beliefs, whose very identity and survival have been endangered".

There was a moment in his speech when the Pope seemed to open his heart more, and he made several appeals more concrete. At one point, he revealed: "How much we have prayed in these years for peace in Iraq! St. John Paul II spared no initiative, and above all he offered prayers and suffering for this. And God listens, He always listens. It is up to us to listen to Him and walk in His paths."

The The numbering of the expressions quoted below is not found in Pope Francis' speech, but can serve as a guide. They are guidelines for working for peace, according to his words at the Iraqi Presidential Palace:

First. "Let the guns be silenced, let their proliferation be prevented, here and everywhere."

Second. "Let the particular interests cease, those outside interests that are indifferent to the local population."

Third. "Let the builders, the artisans of peace, the little ones, the poor, the simple people, who want to live, work and pray in peace, be given a voice."

Fourth. "No more violence, extremism, factions, intolerance; that space be given to all citizens who want to build this country together, from dialogue, from frank and sincere, constructive discussion; to those who are committed to reconciliation and are willing to put aside, for the common good, their own interests."

Fifth. "In recent years, Iraq has been trying to lay the foundations for a democratic society. In this regard, it is essential to ensure the participation of all political, social and religious groups, and to guarantee the fundamental rights of all citizens. Let no one be considered a second-class citizen. I encourage the steps that have been taken so far in this process and hope that they will consolidate serenity and concord".

In his first speeches in Iraq, Pope Francis has used the term "Iraqi" in his first speeches in Iraq. "fraternal unity". on several occasions. This is how he expressed himself before the authorities, representatives of civil society and the diplomatic corps, remembering the most vulnerable, and those who have been victims of persecution and terrorism. These are ideas that the Pope will most likely expand on at the Mosul event on Sunday.

"A society that bears the stamp of fraternal unity is a society whose members live among themselves in solidarity. Solidarity helps us to see the other [...] as our neighbor, our companion on the journey. It is a virtue that leads us to make concrete gestures of care and service, with particular attention to the most vulnerable and needy. I am thinking of those who, because of violence, persecution and terrorism, have lost family members and loved ones, homes and essential goods.".

"You come out of a crisis better or worse."

"But I also think." Francisco pointed outThe Pope's message, "in all the people who struggle every day to find security and the means to move forward, while unemployment and poverty are on the rise. Knowing that 'we are responsible for the fragility of others' (Encyclical Letter Fratelli tutti, 115) should inspire every effort to create concrete opportunities in the economic sphere and in the field of education, as well as in the care of creation, our common home.".

And this was its realization: "After a crisis it is not enough to rebuild, it is necessary to do it well, so that everyone can have a decent life. We do not come out of a crisis the same as before: we come out of it better or worse. As political and diplomatic leaders, you are called upon to promote this spirit of fraternal solidarity. It is necessary to fight the scourge of corruption, abuses of power and illegality, but it is not enough. At the same time, justice must be built, honesty and transparency must grow.