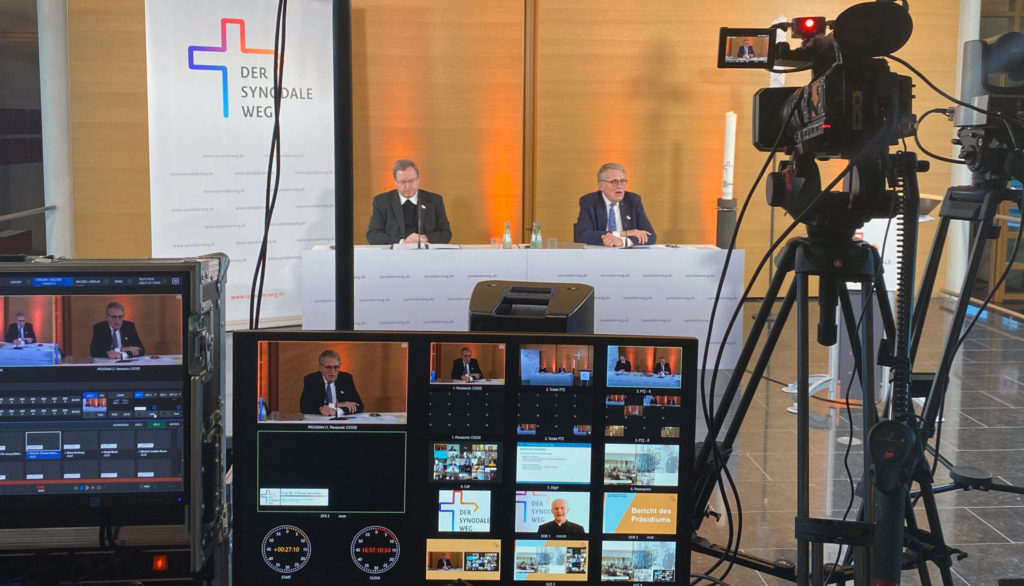 Card. Rainer M. WoelkiI ask that space be given in the synodal journey to the Pope's indications".

In the wake of the scandal that, in January 2018, led to the publication of past clerical sexual abuse in Germany, the German Bishops' Conference (DBK) commissioned a study by research institutes.

Beginning of the synodal journey

Following the publication of the MHG report - an acronym for the Universities of Mannheim, Heidelberg and Giessen - the DBK decided at its March 2019 assembly to initiate a reform process to prevent future abuses. Thus began the so-called Synodal Path, which would be divided into four forums: "abuse of power", "sexual morality", "celibacy" and "the role of women in the Church".

Shortly thereafter, the DBK announced that the "Central Committee of German Catholics" (ZdK) would participate in it; in total, the members of the Assembly number exactly 230.

Participation of the laity

The participation of the ZdK in the process brings advantages - the laity seem closer to society to judge the "credibility" of the Church - but also a problem of mentality: many of them are or have been professional politicians: its current president Thomas Sternberg was, from 1989 to 2017, first a city councilor in Münster and then a deputy in the North Rhine-Westphalia Regional Parliament. Herein lies a fundamental, possibly instinctive misunderstanding: applying to the Church the criteria of democracy that prevail in politics.

Thus, one of the three vice-presidents, Karin Kortmann - who has been a deputy in the Bundestag and Secretary of State - demands "division of powers" in the Church and the election of the bishop by "the rank-and-file Catholics", for only in this way would he have "legitimacy". In response to the project that includes these demands, the Bishop of Regensburg, Rudolf Voderholzer, addressed a letter to the President of the DBK, Bishop Georg Bätzing, in which he emphasized that these demands "are based on a way of understanding the Scriptures, the magisterium and the Church that is fundamentally different from that of past centuries".

Herein lies a fundamental misunderstanding: applying to the Church the criteria of democracy that prevail in politics.

Another aspect that has been weighing down the synodal process is linking the concrete issue of sexual abuse with a structural reform of the Church. On February 10, Bishop Czeslaw Kozon of Copenhagen, one of the observers of the synodal process, said that it should have focused on abuse: although there may be points of contact, "aspects of the structure of the Church should not be dealt with in such a radical way.

Pope Francis sent on June 29, 2019 a. Letter to the people of God on pilgrimage in GermanyIn it he said: "The 'Sensus Ecclesiae' frees us from particularisms and ideological tendencies to make us taste the certainty of the Second Vatican Council".

The 'Sensus Ecclesiae' frees us from particularisms and ideological tendencies to make us taste the certainty of Vatican Council II.

Pope FrancisLetter to the People of God on pilgrimage in Germany, June 29, 2019.

Reactions to the letter showed the deep division of opinions within the synodal pathSome, such as Michael Fuchs, Vicar General of the Diocese of Regensburg, interpreted it as an invitation to rethink the whole process; the then DBK President, Cardinal Reinhard Marx, and the President of the ZdK saw it as an endorsement.

Meeting of the four forums

Thus, on February 4 and 5, the following events took place online The four forums, in order to prepare the draft resolutions to be voted on in the plenary session, expected in September.

Margareta Gruber, professor of Biblical Exegesis and Theology and advisor to the synodal process, said about the document that the Plenary may approve: "Of course, no matter how good it may be, our document will not revolutionize the Church tomorrow; but we are a factor in the workings of the Spirit. Nor will the Pope be able to decide on these questions alone; a Council will have to be held... with the participation of women".

Self-confidence is not lacking.

Card. Rainer M. WoelkiI ask that space be given in the synodal journey to the Pope's indications".