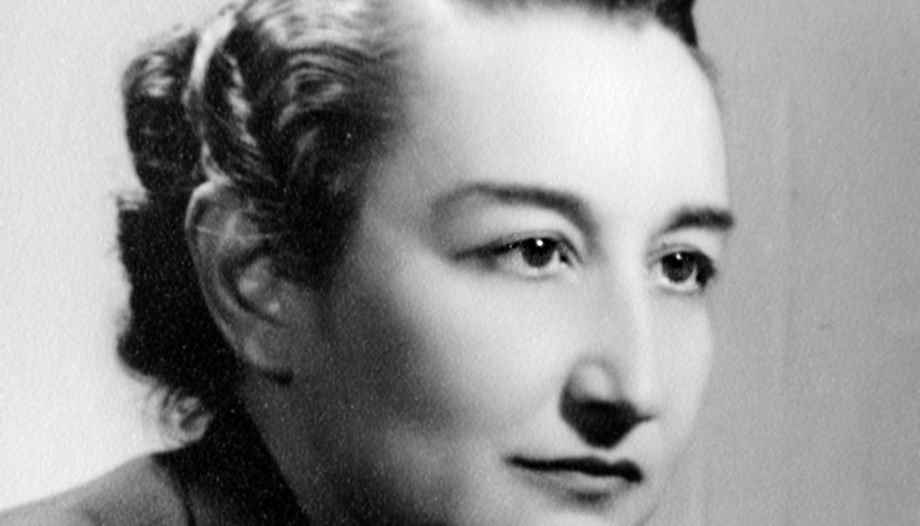 Aside from being one of the two women (the other was Josefina de la Torre) included by the Gerardo Diegoin 1934, in the second edition of his Contemporary Spanish poetry -an example of a premonitory anthology that established, to a great extent, the list of the official authors of her generation, that of '27- and favorite disciple of the Nobel Prize winner Juan Ramón Jiménez, there are many merits that make Ernestina de Champourcin's work relevant today.

She was able to turn her own life into a convinced advocate for femininity, first as a member of the Lyceum ClubShe collaborated as secretary of the Literature section from 1926, in its Spanish beginnings, until 1936, and then, from her Mexican exile (from 1939 to 1972, when she returned to Spain), after discovering in 1952 her vocation to the Opus DeiThus strengthening her conviction in the radical fundamental equality of nature and rights between the two sexes, which her founder always preached, and which she was able to defend with such constancy in the field she knew best, that of lyric poetry: "I have never managed to think" -she once replied- "of poetry as something exclusively masculine or feminine".

Hence, he stated in the prologue to his compilation for the BAC entitled God in today's poetryI realize that there are many female voices chosen by me if one compares their number with those included by other anthologists [...]. In contrast to this sobriety or penury, I have dared to choose poems by fifteen women, which will be sixteen if my editors continue to insist that the anthologist herself be included".

God as a foundation

On its own merits, it was logical to include it in his own anthology, and, moreover, with five poems. Especially when it could not be otherwise: God Himself constitutes the foundation on which his literary production is based, completely autobiographical, marked perhaps at the beginning by a presence in the dark of divinity:

What a divine gift
is this life in the dark
to live by loving,

but growing from his Mexican exile, with a "deepening" -We add, "in their faith and in the consequences in their daily lives", and established "in the bottomless pit of the God within me".

In fact, in a letter addressed to her friend Rosario Camargo when she was 84 years old, she expresses the evolutionary line of her inner life: "I can only pray and pray and write when God wants me to and not as you want me to. I have always done it this way and it amuses me that you get so heavy when you touch this subject. Do you still not know that God and poetry are inseparable?". At all times aware that her poetic orientation "is a vocation: I write when God wants me to", she affirmed, we should not see her as a genuine "mystic", in the San Juanist way, nor as a poet with an established schedule for composing verses, but as a sensitive, spiritual woman, with a very rich life of her own, who knew how to discover God as her great value and, after the death of her husband, as her great and disturbing Love.

As soon as one accesses any of her poetry books, hers has the indelible stamp of authentic, intense and penetrating poetry, logically immersed in specific historical and literary circumstances, in which the avant-garde had enormous power, to which was added the teaching of Juan Ramón Jiménez and his romantic-symbolist precedents as well as that of the great mystics of Avila, whom she had known since her adolescence, or, to a good degree -although little studied-, her knowledge and meditation on the Psalter, in addition to the teaching of Escrivá de Balaguer through his writings and his evangelizing message.

However, despite (or thanks to) this cultural background, she is found to be settled in a personal world with an unmistakable lyric writing, sometimes rhetorical, which reveals her celebrated religiosity -there is more existential than literary weight in her poetry-, with abundant incursions into her own interiority.

Hence, in one of his many orational poems he writes: "Teach me [Lord] to be truly silent, inward / to look out into the void where I can hear you. [Teach me in the dark, in the sullen desert / where those who know how to find you have searched for you".

The cry and confidence that come to him from the depths of faith and that, as we pointed out earlier, bring to mind his permeability to assimilate the psalms:

I can do nothing without You. With You I fear nothing.
Be my shield, O Lord, my staff and my torch.
In You I can do all things and I forget my weakness
if your arm guides me and your love sustains me".

For Ernestina, poetry was her most obvious way of understanding her friendship or, better said, her loving relationship with God: a place of intimate settlement that brought her the fact of knowing she was alive, in a true contemplative attitude, as the following tenth reflects:

There is no flower that does not smell me
to your perfume, Lord,
neither joy nor trembling,
seems to be looking for its nest
in your secret abode;
and my eyes see nothing
where you are not hidden".

In this testimonial process of hers, immersed in constant ups and downs, with greater or lesser poetic achievements, her thirst and dealings with God finally become compatible with a celebratory poetry of ordinary life, on whose pillars are based, especially, many of her spiritual hai-kais, in which she opens herself to the laconic poem, the result of what we could call the kaleidoscope of her routine tasks: "the everyday", as she calls it, in persevering dialogue with "the Game of Grace", in which she never ceased to involve herself until finally "closing her eyes to open them one day... [...] / immutable and eternal".