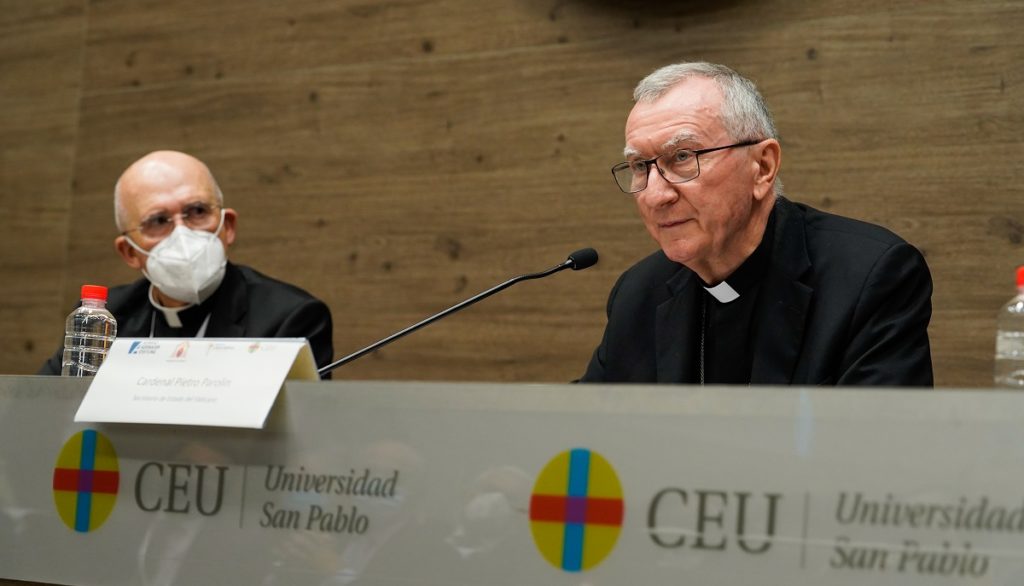 This weekend, from September 3 to 5, the Moncloa campus of the CEU San Pablo University hosted the II International Meeting of Catholic Politicians, organized by the Archbishop of Madrid, Cardinal Carlos Osoro, and the Latin American Academy of Catholic Leaders, with the support of the Konrad Adenauer Foundation.

Presentation of the meeting

The theme of the congress A culture of encounter in political life for the service of our peoples summarizes the ideas that were discussed during the conference. Seventy-four Catholics with public responsibilities, from different parties and from 18 countries, have held these days "a fraternal and constructive dialogue that, in itself, shows how the Gospel facilitates the possibility of thinking differently, respecting each other and discovering together the common good and a better future for all, especially for the most vulnerable people," said the general director of the Latin American Academy of Catholic Leaders, José Antonio Rosas.

During the presentation press conference, Cardinal Carlos Osoro stressed that "it is essential to face the present in a constructive dialogue" and that, in order to dialogue, "it is always necessary to lower the defenses and open the doors"; it is a matter, he insisted, of speaking "from the identity we have", but "without presuming that the other is wrong".

In similar terms, Clara López Obregón, a leftist political leader in Colombia, who was a minister, mayor of Bogotá and presidential candidate, has called for working "from the common humanity" to put an end to "the throwaway economy" of which Pope Francis speaks, and has opted for a State that can "guarantee fundamental rights: health, dignified life...".

At his side was the Christian Democrat Miguel Angel Rodriguez Echeverria, who was president of Costa Rica, secretary general of the Organization of American States and president of the Christian Democratic Organization of America (OCDA). He recalled that "human life is one, we are one person, although we perform different activities", and that, therefore, "one cannot separate the transcendent faith" from the tasks that one has.

To raise the bar

José Luis Segovia, Vicar for Integral Human Development and Innovation of the Archdiocese of Madrid, assured that the II International Meeting of Catholic Politicians wants to be "a vindication of Politics with capital letters", so that this "does not become a space in which there are confronted interests", but in the end "human dignity is not safeguarded".

He wanted to emphasize to the audience of more than seventy Catholic politicians from nineteen countries, the desirability of having believers like them in politics not to "neo-colonize public spaces", but to "raise the bar" so that values such as solidarity, dialogue and forgiveness can emerge.

As he pointed out, although sometimes politicians are "quite reviled", in his case it is important that they feel that "the Gospel is an invitation to the sublime, to realize the dream of God on Earth" and, therefore, he has shown his "recognition towards the action that you develop, from mediations of all kinds, at the service of the general interest".

What can a Christian vision bring to politics? This question was the starting point for the keynote address given by Cardinal Pietro Parolin, Secretary of State of the Holy See, on Saturday morning.

Using correct Spanish, including some Latin American expressions, with a noticeable Italian accent, he addressed the 70 or so politicians from 19 countries present in the auditorium, whom he encouraged to try to be "joyful messengers of proposals for improvement".

The main theme of Cardinal Parolin's speech, entitled Culture of encounter and civic friendship in a world in crisisThe theme of the meeting was "culture of encounter" and "social friendship. He stressed that these ideas should not remain generic concepts or "mere propaganda slogans", but should be translated into practical decisions.

The culture of encounter seeks to discover in diversity "an added value, an enrichment," and therefore tends to integrate the diverse; and if acting in this way is "difficult and slow," "this cannot prevent us from working," said the Secretary of State. It is natural the existence of oppositions and conflicts, which have to be assumed, as Pope Francis affirms, but without being trapped in them, but transforming them "in the link of a new process".

As for social friendship, it is "the effect of the best policy". It includes a concern for those who suffer most, and makes it possible to translate programs into concrete actions. For this. "a creative courage, a firm will" to act must find its way. Precisely, in Fratelli tutti n. 14 Francis asks himself "what is the meaning today of certain expressions such as democracy, freedom, justice, unity", which "have been manipulated and disfigured to be used as an instrument of domination, as titles empty of content that can be used to justify any action" and are thus reduced to "mere components of political language", without being considered true values.

On the contrary, political action should include "a well-founded anthropological dimension, which places the person at the center" and recognize the value of justice as a "social regulator". In addition, he asked that authority not be exercised with "a personal, partisan or national vision", but with "an organized system of people and shared and possible ideas" in search of the common good.

Referring to Catholic politicians, Cardinal Parolin stressed that it is up to them to identify "the possible and concrete applications of social friendship and the culture of encounter"; and, even more decisively, to understand that "these are two components that are transmitted through individual behavior," that is, through personal witness.

All this constitutes, he said, "an interesting and feasible itinerary," based on certainties capable of leading to the common good.

After Cardinal Pietro Parolin's lecture and the interventions of the other authorities present, the participants continued their discussions at tables and in working groups. The Archbishop of Madrid, Cardinal Carlos Osoro, closed the meeting with the celebration of Holy Mass.