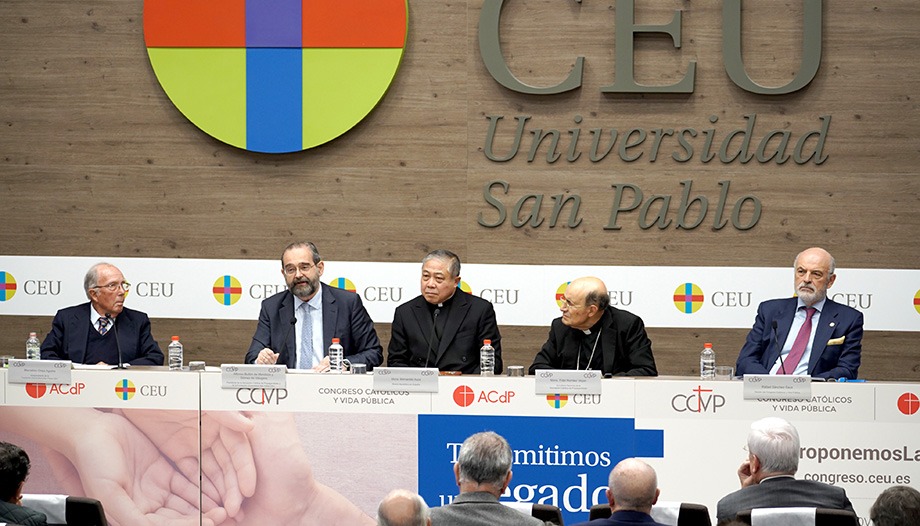 This was announced by the director of the congress, Rafael Sánchez Saus. This year, the CEU event would have "a marked testimonial character", key in the transmission of the faith. "It is not a matter of looking back with nostalgia, but of interpreting a living heritage that becomes a mission conscious of the greatness we have received," he added. Lydia JimenezThe presentation was made by the Director General of the Crusades of Santa Maria, at the presentation. And so it has been.

We propose faith. Transmitting a legacy', was the theme of this weekend's meeting, organized as always by the Catholic Association of Propagandists (ACdP) and the San Pablo CEU University Foundation. Kenneth Simon Center for American Studies of the Heritage Foundation, Richard Reinsch; the president of European Fraternity, Archduke Imre of Habsburg-Lorraine, the painter Augusto Ferrer-Dalmau, and the prior of the Abbey of the Valley of the Fallen, Santiago Cantera, among the speakers.

The contribution of the faith of the laity is "decisive" for the present and future of the Church and society, "and there is no room for discouragement and pessimism in this secularized society, and we go forward with the joy of the Gospel," said the Nuncio of His Holiness in Spain, Msgr. Bernardito Auza, who conveyed a message from Pope Francis to the congress, encouraging everyone to be "agents of the new evangelization, being bold in the face of the throwaway culture and inviting them to intensify their friendship with Our Lord Jesus Christ".

The title of the congress responds to the Pope's call "to give primacy to God and return to what is essential," and "faith is proposed, not imposed," stressed the National Councilor of the ACdP and Archbishop Emeritus of Burgos, Fidel Herráez. Marcelino Oreja, vice-president of the ACdP and of the San Pablo CEU University Foundation, and former minister, pointed out that "in the face of the challenge of the Church, a renewal of faith is needed".

In conclusion, President Alfonso Bullón de Mendoza emphasized that there are two intimately related dimensions, that which is born of an ever-present presence and that which results from a legacy and a history, which form "the Church, which is the dwelling place of God".

José Antonio Kast's references to his family were abundant and important in his intervention, as it would happen, in a different context, the European one, in the closing speech of Archduke Imre of Habsburg-Lorraine. José Antonio Kast is the son of German emigrants to Chile, the youngest of ten siblings, married to Pia for 31 years, and belongs to the Schoenstatt Movement.

The politician reported that in the year 1995, 80 percent of the population of Hispanic America declared themselves Catholic, while in 2018, this percentage had dropped to 59 percent, with a decrease in the participation of Catholics in Sunday Mass, and in vocations.

In his opinion, this is largely due to the fact that in Latin America, "the family, marriage between a man and a woman, the right to life and education have not been defended with sufficient force", and "the education of our children has been taken away from us by the State". "The family is the fundamental nucleus of society," he stressed.

In this line, he encouraged Catholics "not to exclude ourselves from any public policy, we have much to contribute from our faith. Let us defend our ideas without fear and without complexes, because they are the ones that will allow us to build a Latin America in peace and freedom". Kast pointed out that "in the last decades we have not found consistent formulas to grow in social and political ethics according to the Gospel, with an integral response". "We have not known how to enthuse people with the richness of marriage and the family".

"With Pia, who accompanies me here, they tell us: how terrible, nine children! And we tell them, but they are an incredible gift, we invite you all to see what a big family is." [...]

At the end of his speech, Kast encouraged to "trust in the Lord", to participate in the media, to discover each one's strengths and weaknesses, to transform social networks into personal bonds and to "lose the fear of ridicule". "God loves us, God does not fail," he concluded.

The young Archduke Imre of Habsburg-Lorraine, president of European Fraternity and wealth manager, is the great-grandson of Blessed Charles of Habsburg-Lorraine, former emperor of Austria-Hungary, beatified by St. John Paul II in 2004. He is married and is expecting his fifth child with the Archduchess, who was also present in the auditorium of the educational institution.

Imre de Habsburg-Lorraine analyzed the role of Christians in Europe, and pointed out that "the best thing a Christian can do today is to witness to the faith and pass on to the next generation the rich spiritual and cultural heritage we have been given.". "For my family, the Habsburgs, this question of heritage transmission was always key." he added. "Today there is no material heritage to pass on, as all our belongings were confiscated after World War I, but there is tradition and family principles.".

The Archduke stated that "Europe cannot be understood without taking into account its roots, otherwise we cannot understand its vocation".and stressed the importance of cathedrals and churches in villages all over Europe, for "say something important about the impact that Christianity had for centuries, and continues to have, on European history.".

Courage" and "heroism" are required.

"Today we are witnessing a Europe stripped of its Christian essence. It is essential, more than ever, to rediscover what Europe really is, to rediscover its soul.". The archduke highlighted in this regard five key pillars that shape the role of Christians today: "to be rooted in Christ; to know where we come from; to develop critical thinking; to participate and be sustained in a strong community; and to not be afraid to be a sign of contradiction, standing up for the truth, whatever the cost.".

In conclusion, Imre de Habsburgo-Lorena recalled that "We are asked to act as creative minorities, capable of changing the course of history. [quoting Pope Emeritus Benedict XVI]. "Our faith and the truth we hold about the human person are our treasure.". "We have a duty to share this treasure with everyone, and at all levels of society. This is a time that requires great courage and, at times, heroism. Fortunately, the Christian is always full of hope and knows that, in the end, Good will prevail.".

The day before, Richard Reinsch warned about woke culture in his lecture, and stressed that "under wokeism, the traits that define a decent community, such as forgiveness, humility and compromise, will not be possible, and those who suggest them will be accused of racism. The social justice constitution of despotism would fuel a state built for one purpose: to gut the freedoms Westerners currently enjoy. If left-liberalism has always been at war with the rule of law and the restricted state, the woke culture will destroy all established or limited notions of law."

The director of the Heritage Foundation's B. Kenneth Simon Center also pointed out that the roots of identity politics lie in Marxism's epistemology, anthropology and opposition to God: "Freedom according to Marxism requires first and foremost an integral equality. The individual is radically subordinated to the community and his freedom depends on the structure of the whole community being transformed by the elimination of the family, religion, the nation, the military, among other vital institutions."

On the last day of the Congress, which coincided with the Solemnity of Jesus Christ King of the Universe, a Mass was celebrated by the Cardinal Archbishop of Madrid, Monsignor Carlos Osoro, before the closing ceremony by the director, Rafael Sánchez Saus, and the president of the ACdP and the CEU Foundation, Alfonso Bullón de Mendoza.

The Manifesto The final part is a call to propose the faith, to transmit a legacy, and ends with a quote from Father Angel Ayala: "If we are men of action, we will be optimistic and generous, because God does not bless regrets, but sacrifices and works".