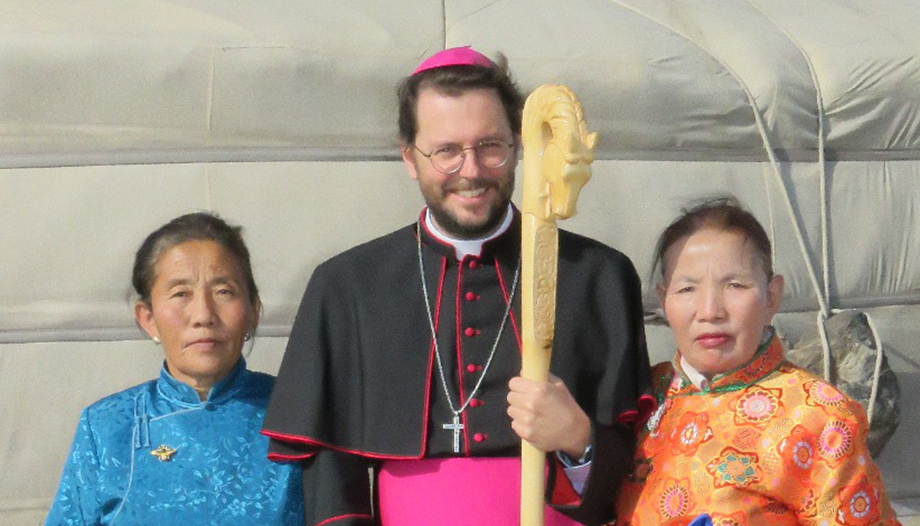 The future cardinal, Giorgio Marengo, apostolic prefect of Ulan Bator, the capital of Mongolia, has about 1% of the population under his pastoral care. The key to growth of the Church in this missionary land is as he says: accompaniment of the newly converted and an exemplary Christian life.

“To think of appointing cardinal a bishop with so few faithful is a great missionary gesture”. Fr Giorgio Marengo, apostolic prefect of Ulan Bator, capital of Mongolia, was in Rome when he came to hear of his appointment as cardinal, to his complete surprise.

“Those days”, says the Consolata missionary, “I had gone with a delegation of Mongolian Buddhists to see the Holy Father; this was the first time for such a visit. We had just ended this historical and beautiful initiative of inter-religious dialogue when, during the Regina Coeli on 29th May, I heard the Pope say my name. At that moment I was overcome by a very powerful joy and a feeling of deep gratitude and humility”.

The Church under the care of Mgr Marengo in this East Asian country is very small: 1,400 faithful out of more than 3 million inhabitants, eight parishes and a public church which is not yet recognized as a parish.

“Here the majority of the population is Buddhist whereas the Catholics are fewer than 1%. It is different for the Protestants, Evangelicals and Pentecostals, who are more than the Catholics,” Mgr Marengo adds.

What work of evangelization is the Church carrying out in Mongolia?

I will answer by using a metaphor taken from a great Salesian pastor, the Indian archbishop emeritus, Thomas Menamparampil: we are trying to whisper the Gospel message into the heart of Mongolia. It is an expression that speaks of our commitment to living constant witness of the Gospel message, discreetly, with no external show.

70% of our activities have to do with social welfare: education, medical care, assisting those in need and also helping preserve Mongolian culture.

Then, of course, there is the celebration of the sacraments. The Church is active on many fronts and tries basically to share the joy of the Gospel in a humble yet profound manner.

This year will be thirty years since the revival of the Church in Mongolia and its establishing diplomatic relations between the country and the Holy See. In few words, what can you say about this thirtieth anniversary?

Thirty years are not few, but not many either. Nonetheless, it has been a significant time in which the Church has been able to show herself and put down roots. If today we have nine communities in this whole area, it is a sign that the Gospel is being accepted and being lived in practice.

At the beginning, it was a time of creating new frontiers in a nation which suddenly saw how atheism and a Communist-style regime were collapsing and all sense of direction was being lost. It was at this precise moment of history when the first three missionaries arrived, among them Mgr Wenceslao Selga Padilla, the first prefect apostolic of Ulan Bator. They set out by starting very specific projects of friendship and solidarity in order to form relations based on trust that would last over time.

On the other hand, what are the prospects for the future of the Church in Mongolia?

There is still a lot to be done. This first nucleus of Christian life that we see springing up still needs great care to be able to continue growing and helping bring about a missionary dimension within our country that can be the sign of its evangelization.

In this regard, one of the main targets will be depth: accompanying those who have become Christians,   and allowing the faith to go deep into the person and into society as a consequence. All the same, as the Pope says, plans and strategies are all very well, but what matters most is fidelity to the Lord lived through a life in accord with one’s faith.

The Apostolic Prefecture of Ulan Bator, the only church in the whole of Mongolia has recently joined the newly-created Bishops’ Conference of Central Asia. What do you think of this?

Before this decision was made, our local Church did not form part of any Episcopal Conference. My predecessor, Mgr Wenceslao Padilla, was in touch with the Episcopal Conference of South Korea in his personal capacity, and we continue on very good terms with them. As time went by and in accordance with the impulse Pope Francis is giving to synodal gatherings, it was decided to identify with an assembly closer to home to exercise collegiality more effectively.

Providence would have it that last autumn the Episcopal Conference of Central Asia was created and we now form part of that. This choice has been most favourable since all pastors of local churches need to have collegial point of reference.